Dominic Browne reports on the Royal College of Nursing's vote of no confidence in health secretary Andrew Lansley and his denial over the level of professional opposition to his bill. 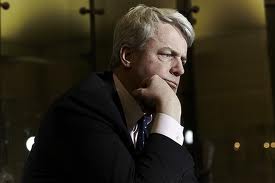 Health secretary Andrew Lansley received a vote of no confidence from nurses this morning but still remains in denial over professional opposition to his health bill. At the Royal College of Nursing (RCN) annual congress delegates voted 98.7 per cent in favour of the motion. This is the first time in 30 years the RCN have made such open revolt against a government policy.

However, he blithely maintained that he still had the confidence of medical professionals, despite this coming on the back of the British Medical Association (BMA) voting for the health bill to be withdrawn in its entirety.

“The RCN was very clear that they supported the principles of reforms… They have said, their general secretary has said to me he supports the bill, they want improvements.

“We’ve already amended the bill and we’ll amend the bill further. It’s not that the professions aren’t keen to do it..”

“Arguments Labour have been making for months are now being made – today by the RCN, yesterday by the president of the College of Emergency Medicine, last week by the Tory-led health select committee, last month by the BMA and the Lib Dems.”

Lansley did promise substantial changes will be made to his bill, without which he said the listening exercise the coalition have launched to save the bill would be trivial, and “we are not here to do something trivial”.

Ed Miliband also attacked the government on the bill this morning, warning:

Miliband laid out five examples of risks in the bill:

1. The prospect of huge fines – up to 10 per cent of their income – for hospitals found to be breaching competition law.

2. Hospitals being subject to insolvency laws meaning they can go bust and leave patients without vital services .

3. Decisions about health services being made in the courts by lawyers and judges instead of doctors and nurses.

4. Lengthening waiting lists as caps on the number of private patients treated in NHS hospitals are lifted and health service beds are handed over to fee-paying customers.

5. GPs getting new powers to charge for service

Left Foot Forward has previously reported Lord Owen’s demolition of the health and social care bill in his pamphlet “Fatally Flawed“, which highlighted the dangers of introducing competition law into the NHS. Lord Owen told Sky:

“They (the coalition government) don’t even know if their new form of wording, “any qualified provider”, will invoke EU competition law.”

He also questioned whether the government have the legislative authority to transfer decision making powers on the health service and remove democratic accountability.

On the issue of insolvency and loss of vital services, the government’s own impact assessment on the bill comments on the need to allow hospitals to fail.

“For competition to work effectively, less effective providers must be able to contract or exit the market entirely; historically, local and political objections have constrained the contraction of poorer providers. International experience confirms that the state finds it politically hard to step away from underwriting deficits and to allow hospitals to fail.

“This presents a strong case for regulatory independence and freedom from political interference.”

We have already reported on how waiting times are increasing under this government and the NHS is suffering real terms funding cuts, at the same time as the coalition is forcing through these massive reforms. It is hard to imagine how waiting times will not suffer under these conditions as private patients get greater access to NHS hospitals.

And the new powers given to GPs to charge for services have been revealed, even by right wing newspapers, to have potential dangers for patients, the Daily Mail reporting:

“The Health and Social Care Bill, currently going through parliament, contains few safeguards to protect patients from conflicts of interest.”

“One GP, for example, reportedly told an NHS provider: “I’ll commission as little as possible from you, as every penny in your pocket is a penny out of mine”, He was told that this was: “not a great basis for commissioning health care.”

Of course if all else fails David Cameron could simply call all these groups “roadblocks” to reform; but how long can they keep up this defence, and the pretence that professional bodies in the health service support this bill?