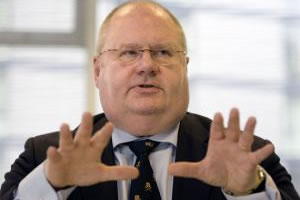 It’s a clear sign of whose side this government is on, when Eric Pickles chooses a CBI dinner to announce the scrapping of the two-tier workforce code – and it’s not the side of low paid workers. In his speech, Pickles described the code as ‘bonkers’. We think Eric Pickles is bonkers – removing this vital protection is a recipe for exploitation.

The two-tier code means that private firms that take over public contracts have to employ new workers on terms ‘no less favourable’ than those given to workers transferred across from the public sector.

Eric Pickles has now fired the starting gun for a race to the bottom – when they bid for public sector contracts, private firms will be free to drive down pay and terms to boost their profits. As the public sector is broken up and parcelled out, private contractors must reduce their prices or lose procurement power.

The inevitable happens – our members’ pay and conditions are squeezed even further and they become the first casualties of these procurement wars.

The most vulnerable professions are concentrated in already low paid jobs, like cleaning, catering and home care – jobs overwhelmingly done by women who are already struggling to make ends meet. Add this together with the Tory’s drive to privatise whole swathes of the public sector, and you leave millions of low paid women exposed to the vagaries of the open market.

And the history books bear this out. When the Tories introduced Compulsory Competitive Tendering (CCT), workers suffered huge cuts to pay and conditions. Staff turnover shot through the roof, and ultimately, standards of public services dropped.

But Eric Pickles should not be so cavalier – he cannot just click his fingers an end the two-tier protection. It’s statutory guidance, so he will have to go to parliament to get it repealed. On behalf of millions of school meals workers, hospital and civil service cleaners, porters, housing benefit staff and other white-collar workers who join outsourced contracts and stand to have their pay slashed, UNISON will be lobbying hard against the plans.

9 Responses to “Pickles’s prescription is a recipe for exploitation”