Leading Conservative blogger Tim Montgomerie, editor of the ConservativeHome website, has lifted the lid on the disquiet among many Tory MPs at the direction of the coalition. 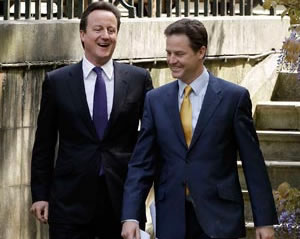 Leading Conservative blogger Tim Montgomerie, editor of the ConservativeHome website, has lifted the lid on the discord among many Tory MPs at the direction of the coalition. Writing in next week’s New Statesman (7th Feb edition), Montgomerie says Conservative MPs “feel like passengers rather than crew”, and that the prime minister feels “almost too content” in the company of Lib Dems.

“Walking around the House of Commons you don’t have to go very far to find an unhappy Conservative MP; Tory MPs feel like passengers rather than crew on the coalition government’s journey…

“The Conservative leadership is struggling to connect with a parliamentary party that feels underpaid, is threatened by a major review of constituency boundaries and isn’t getting the Conservative manifesto that it waited all those years to see implemented.”

According to Montgomerie, Mr Cameron has axed “mainstream Conservative” policies on defence, Europe and the family.

“As midterm unpopularity reaches record depths, as I predict it will, Cameron won’t be able to reach for the mainstream policy toolkit for measures to sweeten the mood of his party…

“The Conservative Parliamentary Party understands the compromises of coalition government but it worries them that David Cameron doesn’t seem to share its frustration at them. He seems almost too content in the company of Liberal Democrats. Is the amity tactical or a testament to something deeper?

“Up until now, David Cameron has given the impression that his cure for internal party unhappiness is to invite Tory MPs for a glass of wine and a handful of Twiglets at a Downing Street reception. If he is to survive midterm unpopularity he needs to do much more to raise his party’s morale.”

Montgomerie’s obervations echo the thoughts of senior Tory backbenchers in the months since the coalition was formed.

In December, John Redwood revealed his frustration at the Lib Dems taking credit for ‘nice things’ the government does:

“One of the things I do not like is the ‘new narrative’ that Lib Dems have come into the Government to bridle the instincts of Conservatives. This story line entails allowing Lib Dems to claim credit for all the nice things that happen.”

While last July, David Davis complained that the government:

At PMQs today, Mr Cameron said he “often writes and speaks to the deputy prime minister”; if the quiet disquiet among his own backbenchers is to be allayed, he may have to pen a few more words and take a few more calls in their direction.

12 Responses to “Montgomerie: “You don’t have to go very far to find an unhappy Tory MP””