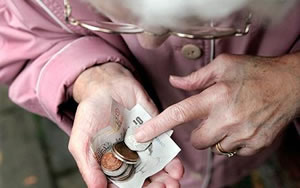 From child care support to pensions, from employment to bus travel, it seems David Cameron’s government is determined to hit women hardest. As Rachel Reeves’s campaign has shown, the plans to change the pension age are the latest in a long line of measures which leave women with an unfair deal.

Don’t get me wrong. Everyone recognises that as we live longer, healthier lives, we will need to work for longer to support ourselves, our families and our communities. So it is reasonable to expect people in their thirties and forties to work beyond 65.

But the government’s plans to increase the state pension age much faster will affect people with less time to plan, and women are the biggest casualties. Many men in their fifties will need to work up to an extra year before claiming their pension.

But for women the increase is steeper, because the government has decided to accelerate the equalisation of the retirement age too. So half a million women will have to work over a year more than they’d previously expected.

This loss of freedom and pension income worth around £10,000 is hitting women aged around 56 and 57 particularly hard. It is deeply unfair on those who are close to retirement to suddenly move the goal posts when they will find it much harder to change their financial and retirement plans. And to hit women harder, when they still have lower earnings, much lower savings and lower pensions than men is unjust.

Many women have told me they have wanted to use this time to spend more time with their family – to help look after their grandchildren. Others are outraged that their pension income is being taken away at short notice. Some feel they have worked for all their lives, never asked for anything and are being robbed of what they are entitled too.

Yet again ministers are showing how out of touch they are. Their failure to understand the reality of women’s lives means their plans – from cuts to public services, cuts to family support and these unfair pension changes – harm women’s independence and the choices they can make.

We’ve already seen very big cuts in support paid to mothers – including cuts in child care, tax credits, child benefit and other support – which will make it harder for women to work. Women’s jobs are being more heavily hit with over 300,000 likely to go in the public sector alone. And buried in the small print of the Budget was a cut to the state second pension by more than £100 a year – which will particularly hit low paid women.

Thanks to our mothers and grandmothers each generation of women has enjoyed more opportunities and greater equality than the last. But after generations of progress, I fear women’s equality is under shocking attack. For the sake of our daughters, we must not allow David Cameron and Nick Clegg to reverse those decades of progress.

So please add your voice to the petition to urge the government to rethink these unfair pension changes.