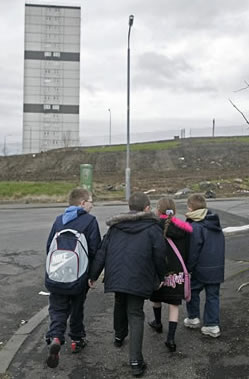 Save the Children in Wales has described as a “scandal” new figures showing that Children in Wales are more likely to live in severe poverty than other parts of the UK. New research by Save the Children published this morning shows that, nationally, 1.6 million children and young people are described as living in severe poverty, which the charity argues is being exacerbated by government policies that will see public sector job losses and changes to benefits.

Responding to the national figures, Save the Children’s Head of UK Policy Sally Copley warned:

“Children up and down the country are going to sleep at night in homes with no heating, without eating a proper meal and without proper school uniforms to put on in the morning. No child should be born without a chance.

“It is a national scandal that 1.6 million children are growing up in severe poverty. If the Government is to fulfil its commitments on child poverty, it must find a way of counting these children in greatest need.

“At the moment, these children are hidden from official view, and their plight unrecognised.”

Across the devolved nations, the picture remains startling. In Wales, children are most likely to live in poverty, with 90,000, or 14 per cent, currently living in low income families, whilst in Scotland and Northern Ireland, one in ten are reported to be in poverty.

Responding to the news that it had a higher proportion of children living in poverty than other part of the UK, a spokesman for the Welsh Assembly government said:

“There is no higher priority for us than ensuring that children and young people whose lives are blighted by poverty have the same life chances and opportunities as their more affluent peers.

“The current economic climate makes it even more important that we retain our commitment to tackling child poverty, by prioritising the needs of the poorest and protecting the most vulnerable.

“Our new Child Poverty Strategy for Wales outlines how we will build on work already under way to tackle child poverty. It responds to the changing UK fiscal climate and sets out a distinctive Welsh approach to the provision of public services – that can help to address the long-term root causes of poverty.”

Whilst welcoming Cardiff Bay’s approach, Andrew Chalinder, head of Save the Children in Wales, urged ministers to go further, arguing:

“We further urge the Assembly Government, local authorities and public bodies to establish a severe child poverty focus as part of their local child poverty strategies. This will help ensure that policy benefits those children experiencing the most intense and severe poverty.”

In Scotland, the main focus of reaction has been on the jobs crisis, with West Dumbartonshire seeing more than 36 people applying for every vacant job. The head of Save the Children in Scotland, Douglas Hamilton, said:

“Urgent action is required in Scotland’s most deprived areas or we will end up with a lost generation. Some of these children will grow up living in households with no working adults – they have never seen a parent or grandparent work and this becomes the norm.”

And in Northern Ireland, whilst the Stormont Executive is committed to the elimination of severe child poverty by 2012, Save the Children has warned that the budget cuts being driven by finance minister Sammy Wilson could exacerbate the problems faced by many children. The head of the charity in Northern Ireland, Fergus Cooper, said:

“Families are getting by on less than £7,000 a year for a lone parent with one child and less than £12,500 for a couple with two children. This means children are going to sleep at night in homes with no heating, without eating a proper cooked meal and without proper school uniforms to put on in the morning.”

With the Institute for Fiscal Studies having previously warned of an increase in child and working age poverty, and Left Foot Forward having just yesterday exposed the misleading claims by the government on the impact its welfare reform plans will have on levels of poverty, Save the Children has called on the UK government to draw up an emergency plan to tackle child poverty.

13 Responses to “Warnings of generation lost to poverty”