When it comes to standing up to David Cameron and George Osborne on behalf of the vast majority of Londoners - whose average income is just £21,800 - Boris Johnson’s record is woeful. 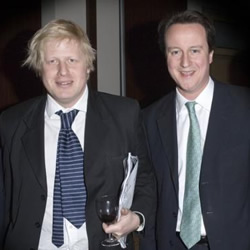 The government is cutting funding to City Hall and to London’s police, fire, transport and economic authorities by half a billion pounds – the equivalent of £200 for every household in London. This comes on top of the cuts Mayor Boris Johnson has been making since he was elected.

So while the country waits for the reality of the government’s first year spending cuts to bite, London is already moving into year three.

Boris said it best himself, telling the BBC in September:

“I don’t think there’s any part of government across Whitehall that’s moved so far and so fast to make cuts.”

The mayor’s relish for cuts means every year London is losing its capacity to progress and develop as it grows. Long-term transport projects have been dropped, cultural and economic investment has been slashed and while London’s population is rising we are not building the homes the city needs.

Londoners consistently rate crime and safety as one of their top priorities. But the Met is forecast to lose around 1,000 police officers.

Shifting around community support officers and some frantic financial manoeuvres from the mayor have limited the cuts to around 600 this year but by 2013/14 London will be 1,000 police and 890 community support officers down from the high point reached after Ken Livingstone’s final budget (unless of course the coalition comes to rescue the mayor’s sinking ship with extra funds).

The police safer schools teams who work with young people to divert them early on away from knife and violent crime are being cut. The number of sergeants assigned to local police teams is being halved. London’s affordable childcare programme, which helped thousands excluded from employment by the cost of childcare into work, has been axed.

The mayor has spent a lot of time and political capital taking on his government by campaigning for a tax cut for the 1 per cent of people in Britain who, like him, earn in excess of £150,000; but when it comes to standing up to Cameron and Osborne on behalf of the vast majority of Londoners – whose average income is just £21,800 – the mayor’s record is woeful.

Vital transport projects like the Thames gateway bridge (and with it £200 million of funding), tram schemes and light rail extensions – the big ticket investments on which London’s future growth depends – have all been dropped.

Bus fares are up 44 per cent since Johnson was elected. Travelcards have reached record highs. And the mayor has thrown away £55-£75 million of annual revenue by halving the size of the congestion charge zone (tellingly, around the same amount as is being raised by putting up bus fares)

The bus service, used by all Londoners but especially those on lower incomes, is being cut. And while Boris Johnson promised to build more than 16,600 affordable homes a year – a number he claimed would be a record – he is now only committed to 12,500.

Londoners will of course welcome the extra few pennies in their bank accounts because of the mayor’s decision not to put up his share of the council tax. But Boris shouldn’t expect too much gratitude as the government snatches back £200 from every household, the cuts bite and his record fare rises all combine to hit them hard in the pocket.