The No campaign were yesterday implying people who follow them on Twitter support them, including a number of Yes campaigners, some whose Twitter photo features the "Yes!" logo. 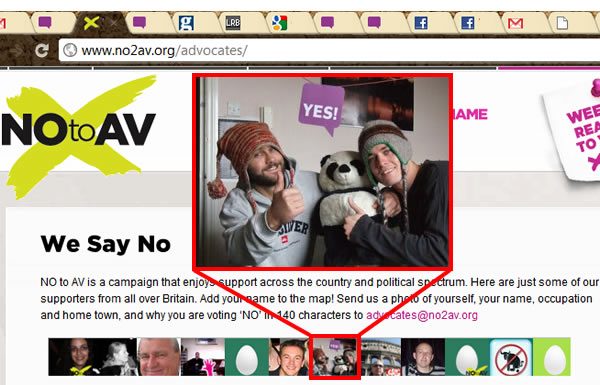 Not content with falsely labelling several Labour MPs as supporters and stretching the facts about Australia’s experience of the alternative vote, the No2AV campaign were yesterday implying people who follow them on Twitter are advocates of their cause – among them a number of Yes campaigners and people whose Twitter photo features the “YES!” logo.

Pictured above is a screengrab showing Daniel Brett as a No supporter; upon seeing it, he tweeted:

Other reformers cited by the No campaign include Barry McComish, who tweeted:

“Its nice of @NO2AV listing my avatar as a supporter of their campaign especially when it has a #Yes2AV banner. I clearly support @YesInMay“

“@NO2AV Can you please remove my avatar from your website as I do not support your campaign. I am a firm supporter of the #Yes2AV campaign.”

“@DBirkin @NO2AV @YesInMay Following them isn’t supporting them & they shouldn’t list me w/out permission. I’ve been falsely represented.”

They also had a picture of Richard Robinson, whose Twitter profile states, very clearly:

• The AV referendum takes place in in less than three months, on Thursday, May 5th; if you aren’t already registered to vote, click here.

9 Responses to “Another day, another gaffe for the No2AV campaign”