With women still earning a sixth less than men, the Fawcett Society’s head of policy and campaigns, Anna Bird, looks at the challenge of equal pay in 2011. 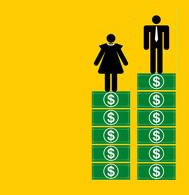 Forty years after the Equal Pay Act, women can still expect to earn around a sixth less than men; here, the Fawcett Society’s head of policy and campaigns, Anna Bird, looks at the challenge of equal pay in 2011

While equality in the workplace has come a long way, the gap in earnings shows just how much further we have to go. The Annual Survey of Hourly Earnings 2010 published last month found that while men’s mean hourly earnings were £16.25, for women that shrank to £13.73, giving a national average gap in pay of 15.5 per cent.

More than 40 years after the Equal Pay Act, women working full-time in the UK are still paid on average almost a sixth less than men. These figures make a mockery of any suggestion that the fight for equal pay is over. Expecting the pay gap to go away by itself isn’t working – we urgently need a new, more proactive tack to ensure men and women are paid fairly.

All the evidence – and 40 years of experience – shows that voluntary action by businesses to stamp out unequal pay has failed here in the UK. The Fawcett Society is calling for the onus to be placed on big business to monitor the gap in pay between their male and female employees. Sadly, the government has decided to shelve plans to implement Section 78 of the Equality Act, which would have seen Westminster given new powers to ensure business takes the necessary action.

The Fawcett Society also wants to see an extension of the right to request flexible working to all employees and reforms to the parental leave system, because outdated employment practices reinforce gender divides both in parenting and our working lives.

Achieving equal pay isn’t a mystery – we know what the root causes of the injustices are, and we know how to effectively tackle them. What’s missing is the political will. The persistent gap in pay between men and women is one of the starkest examples of inequality in the UK today; tackling it would give help create the fairer society many a politician claims to believe in.