Declan Gaffney looks at 'the people Labour forgot about', and discusses disability, benefits and reframing the debate on welfare cuts. 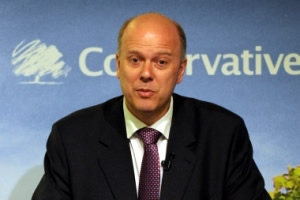 Over on Liberal Conspiracy, Sunny Hundal has raised the question of whether it is possible to reframe the debate about welfare, and gives a sharp account of the impasse that the left risks getting stuck in:

“Left-wingers keep naively believing that all working class people have their values, and therefore standing against ‘welfare reform’ comes with no electoral loss; Labour’s right-wingers keep trotting out the old line that we must occupy the centre ground in order to beat the Tories. Both are losing strategies.”

Is there a way out of this dichotomy? The debate on the left is overwhelmingly framed in terms of values, or of a stand-off between values and electoral strategy, but much of the public discussion of benefits is framed in terms of factual claims about what has actually been happening in the domain of welfare and employment. The right understands this.

When Minister of State at the Department for Work and Pensions Chris Grayling wants to make the case for coalition cuts to welfare, he doesn’t appeal solely to values but presents facts carefully selected to underpin a narrative, as in today’s Daily Express.

This is what he has to say about incapacity benefit:

“More than two million people are stuck on this out-dated benefit, 900,000 of whom have been there for the last decade. These are people that the Labour government forgot about, washing their hands of the problem and letting the taxpayer pick up the tab.”

That statement is not value-free – indeed it implicitly appeals to values which many Labour voters might share (“people the Labour government forgot about”); but the facts (“two million”, “900,000”), and the way they are presented, are essential to the message that there are millions of people who are being kept out of work by the benefit system.

This kind of narrative can’t be countered just by appealing to values such as solidarity or social justice – because many people who share those values also believe that it gives a broadly accurate account of the welfare system and those who rely on it.

Reframing the debate requires a different – and more accurate – account of welfare. Disability will be central to any such account, not just because of the very harsh implications of the coalition’s plans for disability related benefits, but also because lack of understanding of disability and the employment penalties faced by disabled people leads to the kind of misinterpretations of trends in welfare expenditure which the coalition has so ruthlessly exploited.

Mr Grayling’s assertions about Incapacity Benefit are a good example. He says that 900,000 incapacity benefit claimants have been receiving IB – “stuck on this outdated benefit” – for the last decade. The obvious question is: ‘What else do we know about these people?’

As far as we’re aware, the underlying data behind this claim hasn’t been published, but data is available on people who have been claiming benefits for five years or more, and these figure throw a different light on long-term IB claims. There are just over 1.5 million current IB claimants in this category. Of these, two thirds are also in receipt of Disability Living Allowance. See table 1 below. 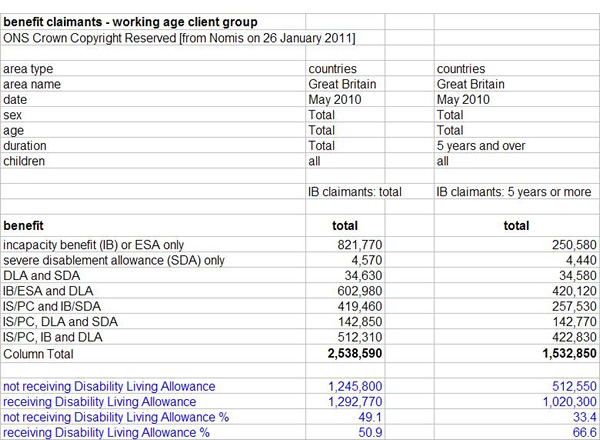 Those familiar with the DLA system will recognise the significance of this statistic. (There’s an excellent account here). DLA is not an out-of-work benefit, and it is not awarded to people with minor impairments. These long term IB recipients are disabled, and not on some vague ‘bleeding-heart’ notion of disability which puts intermittent back pain or mild symptoms of stress on the same footing as paraplegia and severe mental health problems.

They are disabled on the tight criteria for mobility and care needs which have to be met to qualify for DLA – which can be read here. An even higher share of Mr Grayling’s “900,000” figure will almost cetainly be accounted for by people entitled to DLA.

The trends over the last 15 years are clear, with those entitled to DLA forming a continuously increasing share of the out-of-work benefit caseload. In contrast, the numbers of IB claimants not entitled to DLA have been falling for years. These trends show that stereotypes about long-term IB recipients which have long dominated debate about welfare are increasingly detached from reality. The severity of impairment faced by IB claimants is far higher than is widely believed, and higher now than it was in the 1990s.

What has not changed over recent years, as was shown in this important report last week, is the employment penalty associated with disability. But the disability employment penalty is not created by the benefits system, and therefore won’t be resolved by ‘get tough’ policies on benefits – and especially not by cutting the working age DLA caseload by 20 per cent, as the coalition intends to do.

Chris Grayling is not going to draw attention to the severity of impairment faced by IB claimants, for good reason. As long as large sections of the public believe that the IB caseload is dominated by those making a ‘lifestyle choice’, welfare cuts don’t threaten to raise difficult questions about fundamental values. Those who want to reframe the public debate on welfare need to focus on undermining the inaccurate picture of the claimant population which the coalition’s agenda depends on.

They may then find that when it comes to values, the public is more receptive to their arguments than they expected.

29 Responses to “Reframing the debate requires a different, more accurate account of welfare”