YouGov president Peter Kellner today warned Labour they should be "miles ahead" in the opinion polls as anger over the coalition cuts continues to grow. 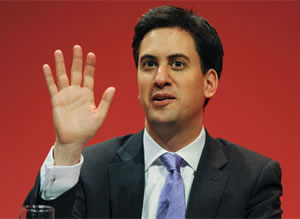 YouGov president Peter Kellner today warned Labour they should be “miles ahead” in the opinion polls as anger over the coalition cuts continues to grow – rather than “a measly five points” in front of the Conservatives. Labour, however, have been ahead in 23 consecutive YouGov polls conducted since mid-December, leading 43%-39% in the weekend Sunday Times survey, with yesterday’s Angus Reid/Sunday Express poll giving Labour an 11-point lead – 43%-32% with the Lib Dems on 11%, leaving the coaltion and Labour neck-and-neck.

“Labour is now the only major, Britain-wide opposition party. It should be harvesting voters’ discontent in huge numbers. Instead its support is stuck on the low 40s, while the Tories continue to attract roughly the 37% support they achieved in last year’s election.

“It is the Lib Dems, of course, who have suffered badly; much of Labour’s rise since last May can be attributed to progressive Lib Dem voters unhappy to see their party in bed with the Tories, rather than voters generally converting disapproval of the Government’s performance into support for Labour.”

“Labour does have a perfectly reasonable answer. Fewer than nine months have elapsed since the General Election. It generally takes longer for ‘mid-term blues’ to hurt a government and propel the opposition into big leads… Give the party and its new leader time (so the argument runs) and Labour should open up a much big lead over the Tories.

“Perhaps. There is certainly room for improvement. Ed Miliband has a net rating of minus six (37% say is doing well, 43% say he is doing badly), though this represents an improvement since the minus 11 the week before and minus 21 in early January.

When people are asked who they trust more to make the rights decisions about the economy, George Osborne or his new shadow, Ed Balls, 22% say Osborne, 19% Balls and as many as 41% neither…

“If the ratings of the two men improve significantly, then Labour should move into double-digit leads and the party will have real hope of winning the next General Election.

“For the moment, the Conservatives’ argument that they inherited a mess that they are now having to sorting out, and that Labour is responsible for Britain’s woes, still has enough appeal to prevent Labour from capitalising on the government’s growing unpopularity.”

Among the other main findings of the YouGov/Sunday Times poll (which echo January’s Ipsos MORI Political Monitor on perceptions of the economy) are:

Government’s record: Do you approve or disapprove of it to date?

State of the economy: How good or bad is Britain’s economy at the moment?

Recession: How likely is it we will have another recession in the next year?

Interest rates: Should they be increased “to combat inflation” or kept low “to encourage economic growth?

Speed of deficit reduction: Should the government change direction?

Ratio of tax rises to spending cuts: Which of the following “best reflects your view”?

Growth: Should the government be doing more to encourage growth?

8 Responses to “Top pollster warns: “Labour should be doing better””