Today's older people may hold most of society's wealth but they are also extremely unequal - and inflation hits the poor hardest, writes Craig Berry. 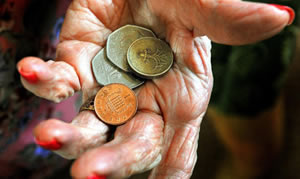 The Office for National Statistics today published CPI inflation figures for December 2010; the news is that inflation was 3.7 per cent in December, up from 3.3 per cent in November. This is a worrying sign for the government, with inflation likely to exacerbate the impact of public spending cuts in terms of both public procurement and individual financial circumstances. The Bank of England continues to overshoot its inflation target.

We should be just as worried, however, about the intergenerational impact of inflation. The ONS reports that the main drivers of the inflation rise are air transport, fuel, gas prices, and food. Older households spend a far greater proportion of their income on many of these items.

The Living Costs and Food Survey 2009 shows, specifically, that:

Of course, the impact of current economic and fiscal woes on children and young people should not be under-estimated. Daniel Elton’s recent article, outlining the impact of public spending cuts in this regard, is therefore extremely timely. Yet there are serious problems underlying all analyses of intergenerational conflict between old and young.

Firstly, as the EHRC points out, it is impossible to prove the collective, deliberate agency of a particular age group. This is a drawback which mars, at least to some extent, all of the recent popular literature on this subject, including David Willets’s “The Pinch“, Francis Beckett’s “What Did the Baby Boomers Ever Do for Us?” and Ed Howler and Shiv Malik’s “Jilted Generation“.

The analysis ignores the significant inequalities that exist among both today’s retirees and those approaching retirement. Inequalities within generations are far greater than those between generations and, of course, different forms of inequality develop and manifest at different stages of the lifecourse.

Assessing the impact of cuts on particular age groups is therefore difficult enough. But when you consider that different age groups will have different needs and expectations at various stages of life, it becomes necessary to consider economic realities outside the direct control of government – of which inflation is a key example – before intergenerational equity can be determined.

Furthermore, it does seem apparent that the current government has downgraded the importance of tackling pensioner poverty in favour of child poverty (the Labour government had prioritised both). The Department for Work and Pensions’ structural reform plan (the coalition version of a public service agreement) includes ‘Tackle Poverty’ as one of six priorities – but the actions and milestones relate entirely to children and their families.

Pensioner poverty appears under the ‘Get Britain Saving’ priority – but the emphasis is on eliminating poverty among future pensioners.

Today’s inflation figures should teach us that generational nit-picking will get us nowhere. When it comes to suffering at the hands of the recession and the deficit reduction plan, old and young really are in this together.