David Cameron's statement that spending would return to 2006 levels once the budget cuts are over obscure the real contraction in public service spending. 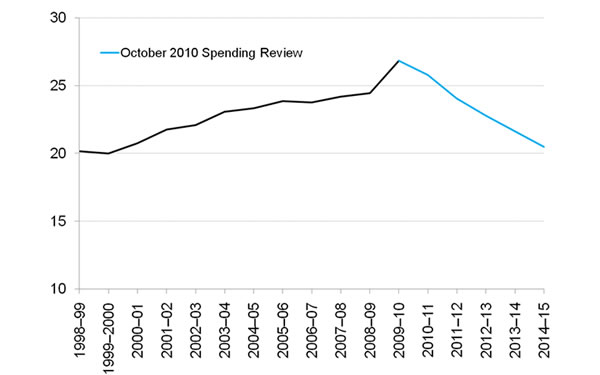 David Cameron reassured nervous citizens in his speech on the government’s health and education reforms yesterday on the scale of the austerity faced by public services. He said:

“Of course some decisions will be difficult and involve difficulties. But when we’re done with these cuts, spending and public services will still be at the same level as it was in 2006. We will still be spending 41% of our GDP on the public sector.”

However, the 41% figure refers to all public spending – including the costs of the financial crisis such as debt repayments, which are projected to rise, and  jobseeker’s allowance spending, also projected to go up as unemployment increases.

A better measure of “spending on public services” or “spending … on the public sector” would be the Departmental Expenditure Limits which set budgets for health, education, local government, policing and other services while excluding social security and debt interest payments.

This graph, extracted from the Institute for Fiscal Studies presentation on the  2010 spending review, shows that the coalition plans to cut back departmental expenditure as a share of national income to a level close to that which Labour inherited from the Conservative government in 1990s, when, according to the prime minister “there was insufficient respect for the ethos of public services – and public service”. The vertical axis represents percentage of GDP.