The Coalition's programme to reform the funding of political parties highlights the complexity of the problem, writes Dr Stuart Wilks-Heeg. 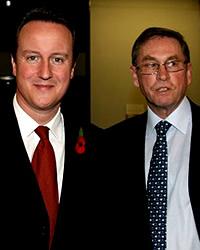 The Coalition’s ‘Programme for Government’ makes a clear commitment to party funding reform, specifying the government’s intention to pursue ‘a detailed agreement on limiting donations and reforming party funding in order to remove big money from politics’.

As with other areas of constitutional reform, matters are proceeding fast. The Committee on Standards in Public Life has already launched an inquiry into the issue, a process which some understandably described as ‘re-opening a can of worms’.

The committee will be aware that British political history is littered with failed attempts to bring about reform of party funding – most recently, the Phillips review in 2007. The acrimony associated with the breakdown of inter-party talks convened by Sir Hayden Phillips in 2007 remains fresh in the minds of most of those who will be called to give evidence to the inquiry over the next six months.

Yet, there is a recent precedent of success in party funding reform – albeit a qualified one. During the mid-1990s, concerns about ‘sleaze’, record spending at the 1997 General Election, and the precarious state of the parties’ finances converged to generate consensus about the need for reform. The result was the Political Parties Elections and Referendums Act 2000.

The Act placed limits on party spending at general elections, and introduced new regulations relating to the transparency and permissibility of donations. Under its provisions, donations of more than a few thousand pounds must be declared, and are a matter of public record (other than in Northern Ireland). Donations are only permitted from UK registered elector or UK-based organisations.

Despite being only a decade old, however, the limitations of the existing legal framework are increasingly obvious. The 2000 Act has brought general election expenditure down, but has not reduced the parties’ need to engage in hugely costly ‘continuous campaigning’ – driven by their efforts to keep pace with the media and communications revolution. The three main political parties spent around £350 million between them from 2005-09, representing a threefold real-terms increase compared to the late 1970s.

With annual expenditure running to tens of millions of pounds, the reliance of the main three parties on large donations has not reduced. If anything the ‘big donor’ culture has become stronger over the last decade – as we show in a recent Democratic Audit study. As the figure below highlights, donations typically make up between one-third and one-half of the income of all three main political parties. By contrast, membership fees vary between just 3 and 14 per cent of income. 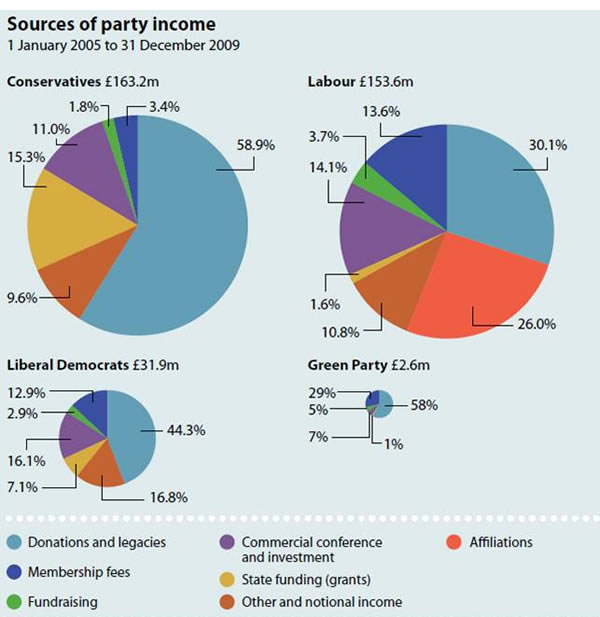 Most concerning of all, controversy about funding has not been eradicated. While prosecutions remain exceptionally rare, greater transparency has given rise to a continuous stream of accusations and investigations, with none of the three main parties escaping unscathed. As in the 1990s, party funding controversies have collided with revelations about the conduct of Parliamentarians – this time in the shape of the MPs expenses crisis. If public confidence about impropriety in party politics was an issue in the late 1990s, it is surely a far greater one now.

While the case for reform is as strong as it was in 1997, it does not follow that the coalition’s position offers a clear way forward. The difficulty, as the Committee on Standards in public life will already be aware, is that a policy of ‘limiting donations’ and ‘taking big money out of politics’ may do more harm than good.

The obvious way of limiting donations is to cap them, and a donation cap of £50,000 per annum from any single source was broadly agreed upon before the breakdown of inter-party talks in late 2007. Clearly, capping donations at this level is not going to persuade many people that ‘big money’ is being taken out of politics. But, just as importantly, the policy carries other dangers.

Some warn that capping donations will not work, since there are a variety of ways in which the cap could be circumvented – for instance by sub-dividing large donations between multiple members of a wealthy family.  Others highlight the risk that a donation cap could work rather too well – that, by taking ‘big money’ out of politics, a cap would effectively emasculate political parties and render them even less effective at engaging with the electorate.

In truth, a donation cap would have a differential impact on the parties. It would almost certainly decimate Labour Party income, and impact sharply on Liberal Democrat income, but could leave the Conservative’s finances rather unscathed.

Everything else being equal, a £50,000 cap would have reduced Labour’s income from donations by three-quarters during the 2010 election campaign. By comparison, Liberal Democrat income would have been cut by half, and the Conservatives by one-third. It is virtually certain, moreover, that the Conservatives would be the best placed of the three main parties to source large numbers of £50,000 donations.

The ‘big donor’ culture is a genuine problem, but a ‘big bang’ approach to donations could become a greater one. The crucial test for party funding reforms is whether they offer scope to restore public confidence and bring about democratic renewal. Measured against that objective, donation caps are likely to have a role to play – but only as part of a package of long-term measures designed to promote fair party competition and encourage political engagement, rather than destroy them.

3 Responses to “Party funding reform: Why the cap may not fit”