The recent IMF report on financial transaction taxes does not seek to endorse or dismiss the idea, but rather provide a categorical analysis and evaluation. 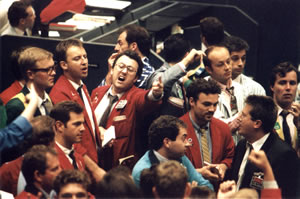 The IMF has finally released its long-awaited report into financial transaction taxes (FTT).  The report does not seek to endorse or dismiss the idea, but rather provide a categorical analysis and evaluation of the history and full workings of any possible international transaction tax(es).

It should be welcomed by proponents, as it challenges and rebuffs many of the criticisms that have been leveled against it. Critics of financial transaction taxes, ranging from Giles Wilkes, the former chief economist at Centre Forum, and now economic adviser to business secretary Vince Cable, to the freelance journalist Tim Worstall, have outlined their opposition to the idea on several fronts.

Firstly, they argue the cost of the tax will be borne largely by the public, not the financial industry and traders operating in the speculative markets. They hold that the tax incidence, or economic burden, will fall on ordinary investors, shareholders, pension-fund holders, travellers etc. Mr Worstall even goes so far to argue that the effects are “so strong that the government could raise revenue collected by abolishing stamp duty on shares”.

A further counter to the much-vaunted tax is that an FTT will destroy marginal profit-making speculative trading. Mr Wilkes posits it is a “virtual outright ban on any speculation that is not looking for very large average profits”. He holds this would severely constrain market liquidity, and thus damage normal market operations and the workings of an efficient financial sector.

Real firms and businesses, from insurance to industry to government finance, would face a massively higher cost. Mr Wilkes states:

“Instead of facing a 0.2 per cent spread for doing a gigantic FX transaction, the absence of millions of small other-speculators on the other side might blow this out – to 0.5 per cent, to 0.9 per cent, more. Who knows? But this translates into a giant cost of capital charge on everyone else.”

A third criticism is that advocates have no idea what impact the tax will have on trading volumes and consequently, on revenues accrued. Related to this point, is their objection on practicality grounds.

So what does the IMF report say to all these points? The report argues it is difficult to make a strong economic case for introducing a currency transaction tax (CTT), since it would raise much less revenue on a considerably more elastic base than a security transaction tax (STT). This piece largely focuses on securities transaction taxes (STT).

Mr Wilkes’s point that financial transaction taxes would considerably increase capital costs for very short-term trading is confirmed by the report. However, they define very short-holding periods as a day(s). An STT at even the very low rate of one basis point reduces securities value by almost half. But for very long holding periods (e.g., 10 years), the drop in value from even a 50 basis point STT is quite small (1.4 per cent). 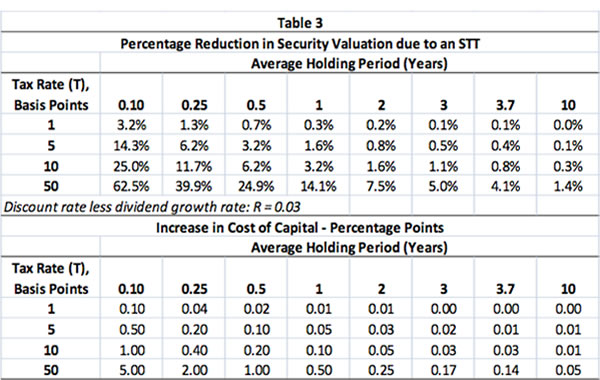 So for an asset which has a holding period of three months (below the current market average) a 0.01 per cent STT would only reduce asset valuation by 1.3 per cent and increase capital costs by 0.04 per cent, a modest transactional cost. Also, transactional taxes over time can get priced in. For instance, the United States’ Securities and Exchange Commission (SEC), its equity market regulator, imposes a 0.17 basis point non-tax charge on stock market transactions to fund its regulatory operations, which has done little to damage market liquidity.

To soothe opponents of an STT, one potential option would be to introduce variable rates in accordance with the length of holding for an asset, i.e. a lower STT would be applicable for very short-term trades. This would take into account the narrow bid-ask spreads of short-term trades. The downside to such a system would be the additional complexity introduced. This is an idea worth exploring though.

To protect savings and investment made by the wider public, any proposed STT could be conditional on the size of the trade. Earlier this summer, Pete Stark, a US Congressman, introduced the ‘Investing in Our Future Act of 2010’ – which would amend the US Internal Revenue Code to impose an excise tax on currency transactions exceeding $10,000, equal to 0.005 per cent of the value of the currency acquired in the transaction (currency transaction tax). The $10,000 threshold is designed to target only large trades, which are predominately made by big financial firms.

Financial transaction taxes, if designed correctly, can raise substantial revenues. The IMF report stated that any proposed STT should have the broadest tax base possible, to avoid evasionary opportunities. If the goal is to raise revenue from the financial sector, one option is to improve the application. Taxing both debt and equity products will also reduce distortion of investment and financing decisions. However, they warn to be careful of taxing public sector debt, i.e. sovereign debt which would push up the cost of government borrowing. Not to do this, though, would reduce liquidity in the private bond market and increase capitals costs. This is something proponents will need to address.

The report found that unilateral STTs can work, even if they are only levied on narrow bases. They catalogue the different nations ranging from the UK (0.5 per cent stamp duty on all secondary share trading since 1986), Switzerland, Hong Kong, Singapore, and South Africa who have levied some form of an STT. This indicates that such taxes do not automatically drive out financial activity, particularly in major financial hubs like the UK and Switzerland.

There is a highly progressive element to any proposed STT, as a large part of the burden of an STT would fall on owners of traded securities. High-income individuals possess a “disproportionate share of financial assets, and would be ones to initially suffer from a fall in taxed securities prices”. In terms of revenue, a low-rate STT on stocks, bonds, foreign exchange and their derivatives could raise substantial sums. An example is that “a one basis point STT on global stocks, bonds and derivatives is estimated to raise approximately 0.4 per cent of world GDP”.

The IMF has provided no ringing endorsement for advocates of FTT (particularly for CTT), but they have provided clarity to the issue and a framework of how it can be successful. They believe an STT coordinated and implemented internationally will reduce market elasticity, and thus be able to raise larger amounts of revenue with a lower rate. If we can secure global agreement, even at a regional level (eurozone) then this dream may yet become a reality.