If the Lib Dem debate on 'Ensuring Fairness in a Time of Austerity' is to be a serious one, it must recommend a fundamental change of strategy for the Lib Dems. 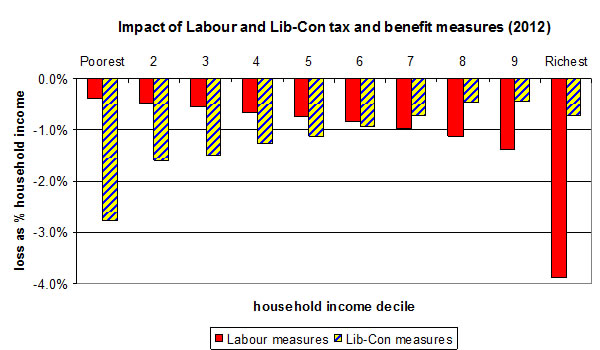 At Lib Dem conference, activists are debating a policy motion entitled ‘Ensuring Fairness in a Time of Austerity’ (page 41) which discusses “the crucial role the Liberal Democrats must play in government to ensure that during this downturn those with the broadest shoulders carry the greatest burden”.

If this is to be a serious debate, it must recommend a fundamental change of strategy for the Lib Dems. Far from being a restraining influence on the Tories, the Lib Dems’ biggest impact on the Coalition Government to date has sadly been to shift policy on taxation further to the right, with profoundly unfair effects – effects that may well end up harming the most vulnerable in our society.

To illustrate what we’re talking about, look at the graph below, which uses data from the Institute for Fiscal Studies, comparing the impact, by 2012, of tax and benefit measures inherited by the Coalition from Labour (red bars) with that of those new measures chosen by Liberal and Conservative ministers at the June 2010 ‘emergency’ budget (yellow-and-blue bars):

Data: Institute for Fiscal Studies (Browne, J. and Levell, P., The distributional effect of tax and benefit reforms to be introduced between June 2010 and April 2014: a revised assessment. 25 August 2010.) The data in this graph are consistent with those in Figure 3.1 in the IFS report.

As can be seen, the impact of Labour’s measures is progressive, with richer households losing more as a proportion of their household income than poorer households (to use the language of the Lib Dem policy motion, those with the broadest shoulders are indeed carrying the greatest burden).

The policy behind this regressive impact is the Lib Dems’ policy of cutting income tax during a time of welfare retrenchment – which they are doing by increasing the income tax personal allowance (increased to £7,475 in the June 2010 Budget, at a cost of £3.7 billion). Because – contrary to the spin the Lib Dems’ put on this policy – it does virtually nothing to help the poorest households, while channelling large amounts of resources to those on middle and higher incomes, it has a profoundly disequalising effect, widening income inequality (including relative poverty).

For an even more shocking graph, see Figure 2.1 of this IFS report (page 15),

Now is not the time to recapitulate the reasons why increasing the personal allowance is a very poor way of helping low-income households – see our earlier posts on this policy from March, April, May and June 2010. Nor are any of these regressive effects unknown to the Lib Dems, whose leadership and activists have both engaged with our research in months gone by. (And the Tories know all this too – see David Willetts’s eloquent destruction of this policy in 2005.)

But we think it is the wrong priority during a time of severe fiscal consolidation. So we would simply make the following two points in urging the Lib Dems to reconsider their policy.

Without giving more help to low-income households, the prospects for inequality are bleak. Indeed, if the Lib Dems were to follow through on their pledge to raise the personal allowance to £10,000 (costing £17bn), it could create the largest increase in income inequality of any single policy measure since Nigel Lawson’s 1988 budget.

Of course, it is difficult to help those on low incomes very much by cutting taxes. That is why tax credits and universal benefits are such important instruments for progressive welfare policy.

Second, while we have nothing against middle-class tax cuts, we think they should only be pursued when affordable – that is, when resources are available to do them without having to make deep cuts to public services to compensate. We don’t think the priority now should be income tax cuts, particularly when there is a large deficit to reduce. (The public seem to agree with this too: polling for Greenberg Quinlan Rosner after the general election found 66% agreeing “it is not the time to cut taxes”, including 72% of Lib Dem voters and 64% of Tory voters.)

The current effect of the Lib Dem tax cut is to necessitate even deeper cuts in public spending. To put this in context, the £3.7bn cost of the income tax cut in the June 2010 Budget is similar to the amount that local authorities in England spend on residential care for older people in a whole year. So not making this tax cut could have prevented future cuts to care. Far from being ‘unavoidable’, the scale of the Coalition’s future spending cuts reflects their own policy priorities.

And of course there is a fairness dimension to these spending cuts too, since it is the poorest that tend to be hit hardest by cuts in public spending.

This is another whammy for the poorest from the Lib Dem tax cut, one that isn’t shown in the graph above. Low-income households will probably lose far more from £3.7bn cuts in public spending needed to make the Lib Dem tax cut possible – see Graph 2 (page 10) here for an estimate – than they will gain financially from the tax cut itself.

Lib Dem activists have an important opportunity to do something bold and courageous at their conference later today: to recommend abandoning one of the Liberals’ flagship policies, one whose effects are so contrary to the way in which they try to sell the policy (remember: only 6% of the cost of raising the personal allowance is actually spent on the stated aim of lifting those on low incomes out of income tax; the other 94% goes to those on higher incomes).

It would take some guts to make this u-turn. The Lib Dems have foolishly staked their progressive credentials on this policy. But it would be the right thing to do given that we are in a time of severe spending cuts. It might even be a first example of the ‘new politics’.

64 Responses to “The graph that shames Nick Clegg”