A new poll shows Labour members and the general public have different views on immigration and transport taxes. But there is common ground on nuclear power and Trident. 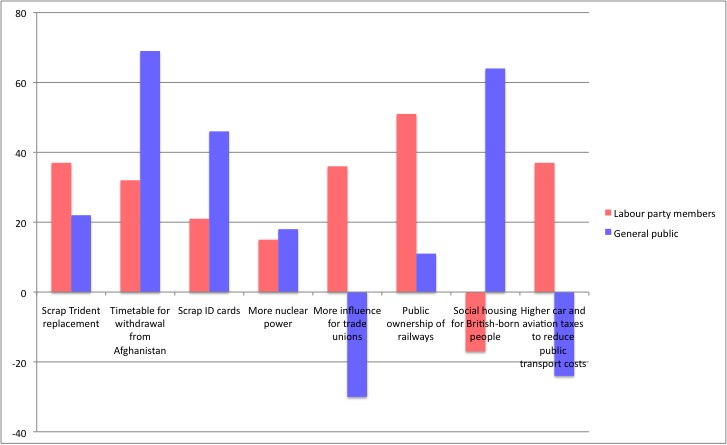 As Ed Balls cautions the Labour party not to vacate the “centre ground” of British politics, new polling from YouGov for Left Foot Forward shows where Labour party members and the general public hold different opinions on a range of policy areas. The findings show considerable differences on immigration, transport taxes, and the role of trade unions. But there is common ground on nuclear power, ID cards, and Trident as well as a significant role for political leadership.

“Mr Cameron will seek to present the coalition as dominating the centre ground, while caricaturing Labour as irrelevant, reactionary and retreating to the left.

“That’s why all of us as leadership candidates, as we seek the votes of Labour and trade union members and the praise of leftwing think-tanks and newspapers, must beware of departing from the centre ground, by making unwise promises or losing touch with our constituents on issues such as crime.

As the graph below shows, Labour party members and the general public have a range of views on policy issues. The most stark differences are on the level of influence that trade unions should exert over Government policies. Net support (i.e. the difference between those who support and oppose a series of policy statements) among Labour party members for more powers is +36 per cent compared to -30 per cent for the general public. The two groups are dramatically at odds on “Changing the current system for allocating social housing, so that British-born people are given higher priority than today, and immigrant families a lower priority” and on higher road and aviation taxes to lower the costs of public transport.

Graph: Net support by Labour members and the general public on a series of policy positions

The survey does, however, imply a significant role for political leadership. The strength of views held on many issues is low with significant numbers of the public in the “Don’t know” category. For example, 30 per cent of the public “Don’t know” how they feel about scrapping Trident suggesting that political leadership could bring the public’s view more into line with that of Labour members. A quarter of the public are uncertain on the questions around nuclear power, trade union influence, and rail ownership. The level of uncertainty among Labour members and trade union members is lower than among the general public.

16 Responses to “Where is Britain’s centre ground?”