Labour members and public disagree on Labour's election defeat. While the recession is common to both, the public put immigration & Gordon Brown ahead of other factors. 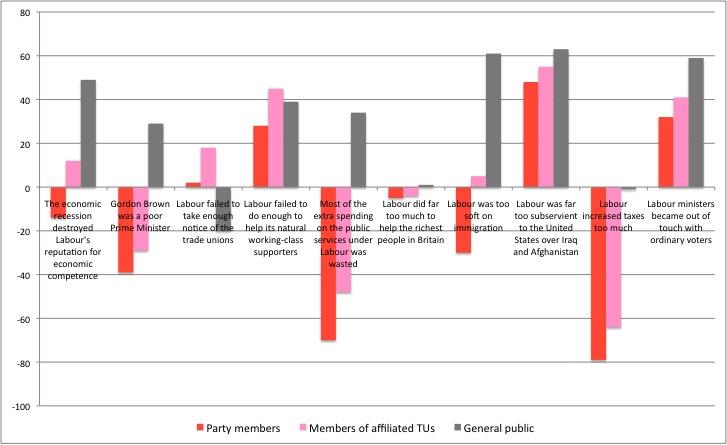 Earlier this week, the Demos think tank examined the views of voters that Labour lost in the 2010 election. A new poll by YouGov for Left Foot Forward shows that Labour members and members of affiliated trade unions have a different assessment to the reason for defeat to the general public.

• Labour ministers became out of touch with ordinary voters; and

• Labour failed to do enough to help its natural working-class supporters.

But while the general public also put the economic recession in their top three, they consider “Labour was too soft on immigration” to be the main factor and “Gordon Brown was a poor Prime Minister” to be the third main reason. Labour being “out of touch” came 4th but not helping its “natural working-class supporters” came a distant joint 6th.

The chart below shows the net support levels* for all ten statements from Labour members, members of affiliated trade unions, and the general public.

While the main reasons cited for Labour’s defeat differ between the voters of each political party, there are some striking similarities too. Labour being too soft on immigration was the number 1 issue for Tory voters, number 2 issue for Labour voters, and number 3 issue for Lib Dem voters reflecting a worrying finding for the Labour party and its activists. The issue was 6th on the list for Labour members and 5th for trade union members.

In terms of the raw numbers agreeing with each of the statements, Labour party and trade union members have most in common with the general public in agreeing that “Labour was far too subservient to the United States over Iraq and Afghanistan” and that “Labour ministers became out of touch with ordinary voters”. Among each group, between two-thirds and three-quarters agree with the statement.

As the debate around Coalition cuts continues, Labour activists will be pleased by the finding that although 59 per cent of the general public agree with the statement that “Most of the extra spending on the public services under Labour was wasted”, under one-in-three voters saw this as one of the main reasons that Labour lost.

* The difference between the percentages of those approving and disapproving

Anthony Wells of YouGov has his own fascinating analysis of these data on his UK Polling Report blog. His conclusion is particularly interesting:

“we shouldn’t go away from this polling thinking that it says a harsher immigration policy is the necessarily the answer. Firstly, people are not always good judges of what drives public opinion or sometimes even their own decisions, so just because immigration was seen as a main driver of Labour’s defeat, it doesn’t mean it necessarily was. Secondly, it may not make good strategic sense for Labour to change their stance on immigration anyway – while it could please their traditional working class supporters, the Labour party is a broad church and also contains middle-class intelligentsia who would be repelled by an anti-immigration policy.”

37 Responses to “Labour members and public disagree on election defeat”