More details from the NHS white paper are emerging on the extent of marketisation and the role of competition that the coalition is planning to introduce. 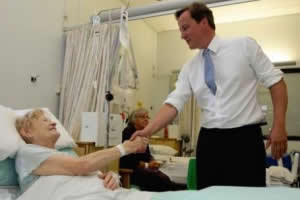 More details from the NHS white paper are emerging on the extent of marketisation and the role of competition that the coalition is planning to introduce. Until now the internal market in the NHS has been governed by specific ‘principles and rules for cooperation and competition’.

But the white paper published this week proposes the introduction of competition law, thus treating the NHS like any other regulated industry.

While media coverage has focused on the abolition of Primary Care Trusts and the use of GP commissioning consortia to purchase care, the marketisation agenda has been largely overlooked.

Left Foot Forward reported in March on the implications of Tory proposals to use competition law to force services to be commissioned through open tender. As shadow health secretary, Andrew Lansley had criticised Andy Burnham’s limits on the involvement of voluntary and independent providers.

The white paper reveals that increased competition is to be introduced by converting Monitor, which currently regulates foundation trusts, into an economic regulator of all NHS care providers, from 2013. Monitor’s role will be to promote competition, to regulate pricing, and to support continuity of services in those areas that are not financially viable.

In its plans the government makes explicit comparisons between Monitor and regulators of utilities:

“Like other sectoral regulators, such as OFCOM and OFGEM, Monitor will have concurrent powers with the Office of Fair Trading to apply competition law to prevent anti-competitive behaviour.”

“Help open the NHS social market up to competition, as well as… require monopoly providers to grant access to their facilities to third parties; or conduct market studies and refer potential structural problems to the Competition Commission for investigation.”

The white paper also refers to preventing anti-competitive purchasing behaviour. This means that GPs sitting down with hospital consultants to discuss care pathways could be outlawed as collusive. Other providers, such as private companies, would be able to take the GP Commissioner to court were they excluded from opportunities to bid to provide care.

Though not widely discussed thus far, it seems inevitable that the coalition government’s package of reforms envisage a marked increase in the role of private companies in healthcare provision. This is caused by the move away from the previous government’s stance that NHS organisations should be the preferred providers of care, combined with the emphasis on competitively open tenders which can be prohibitively costly for NHS bidders.

44 Responses to “Competition law to be introduced to the NHS”