Ed Balls hit out at the Coalition Government for "the most unfair and regressive Budget in a generation" today, calling it "reckless and unfair". 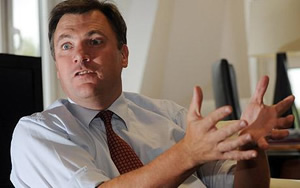 Ed Balls hit out at the Coalition Government for “the most unfair and regressive Budget in a generation” today, calling it “reckless and unfair”. In a column in today’s Tribune, he singled out the Liberal Democrats for particular criticism, describing as “shameful” their decision to “sacrifice principles for power… on the backs of the poorest, the unemployed and the most vulnerable in our society”.

The shadow schools secretary, who along with David Miliband and Ed Miliband is one of the frontrunners to be the next Labour leader, says the party “must come together to destroy some of the myths this new government is trying to spread to justify their slash and burn approach” and “expose each one of these myths designed to justify this ideological assault on our public services based on a neo-liberal view which says getting the state out of the way is the road to a stronger economy and fairer society”.

“This Tory-Liberal government is determined to say that this Budget was unavoidable, that Labour left the country in such a mess they had no choice but to act in this way, that a bloated public sector must shoulder the burden of deficit reduction and that public sector pay and pensions are so generous they must be slashed.”

“First, this was not an unavoidable budget. It was purely ideological. George Osborne does not need to wipe out the deficit in five years. He wants to use the consequences of the recession as a cover to roll back the state and achieve in five years what the Tories did in eighteen.

“The reason we have a deficit is not because of ‘reckless spending’ but because of a global financial crisis which required unprecedented action. Tax revenues fell and spending rose as a consequence – and if we had not allowed public spending to rise recession would have turned to depression.

“Saying ‘deficit and debt is always a bad’ is as absurd as the old notion ‘private sector bad, public sector good’ or that signing up to the minimum wage and the social chapter costs jobs.

“Of course we must start reducing the deficit, but it is the economics of the madhouse to do this before the recovery has been secured. In government we set out a plan to do this with a mixture of growth promotion through our new industrial policy, fair tax rises and spending reductions.

“Second, the public sector is not to blame. This was a crisis caused by reckless bankers, not by teachers, nurses or local government workers on modest incomes. It is immoral for them to pay the price.

“Third, most public sector workers have modest incomes and pensions – though significantly improved compared to 1997. Yes there are some over-generous salaries at the top – as there are in the private sector. Just look at the shocking decision by Network Rail to pay its bosses millions of pounds of bonuses last week. But let’s not allow these examples of greed at the top to feed a battle against millions of public sector workers on modest incomes.”

He concludes by saying the last few weeks prove that Labour “are the only movement in this country that will stand up for working people – whether that’s on tax, public services, pensions or proper rights at work”.

5 Responses to “Balls: This was “the Budget from hell””