Assessments of the Budget's fairness have ignored the impact of spending cuts. Including tax and spend, the poorest households are hit the hardest. 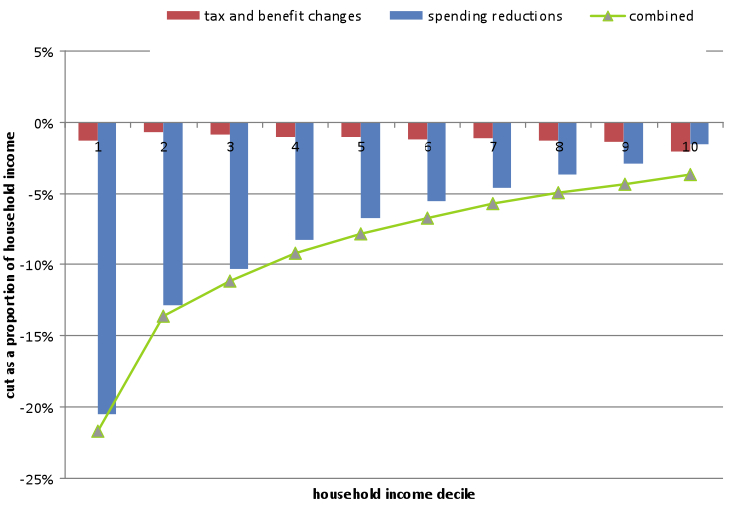 Today we have published a briefing paper for the TUC and UNISON setting out the true impact on households of last week’s Budget.

To date, assessments of the Budget’s impact, and how fair or unfair it might be, have centred on the impact of the tax and benefit changes announced, while ignoring the impact of spending cuts. But using a new model that we have developed for analysing how public spending is allocated across households, we can look at the distributional impact of the spending cuts announced in the budget.

Excluding benefit cuts (and reductions in debt interest payments), the budget announced a further £34 billion of spending cuts by 2012-13. We therefore model the impact of these £34 billion cuts across all areas of non-benefit spending, excluding health and international development (which the Government has said will be protected from cuts). As can be seen from the blue bars in the graph below, the impact of these cuts will be deeply regressive. All households are hit considerably, but the poorest households are hit the hardest.

One important reason for this regressive impact is that a lot of public spending is ‘pro-poor’, with poorer households receiving a greater value of services to meet their extra welfare needs. Because of this, cuts in public spending on major areas of welfare (such as education or social housing) will tend to hit the poorest hardest. Another important reason for this regressive impact is that, for a given value of services lost, the impact will be larger relative to household income for poorer households than for richer households.

These calculations assume that the cuts fall evenly and proportionately across non-ringfenced departments – because until the autumn spending review we have no basis for allocating different levels of cuts to different departments. So these results should be considered a ‘baseline’ scenario, which we will update this autumn when we have a more detailed picture of where the cuts will fall.

But this completely ignores the impact of cuts in public spending on households. What really counts for fairness is not how families are affected by tax and benefit changes in isolation, but how they are affected by the whole package – spending cuts included. And, as TUC General Secretary Brendan Barber, commenting on our analysis in today’s Observer, puts it, when you consider the impact of spending cuts too, it “destroys” any claim that the budget was progressive.

While it is likely there would have been significant spending cuts whoever had been in government, this analysis of the impact of spending cuts raises real questions about the coalition government’s decision to rely much more heavily on spending cuts for reducing the deficit than other parties had planned to. Far from being ‘unavoidable’, this was a discretionary decision – and one that has clearly hit low-income households much harder than they otherwise would have been.

You can download our briefing paper from the TUC website here. More details of our model for analysing the distribution of public spending, which has been developed for a project for the TUC and UNISON, will be published later in the summer.