Nick Clegg affirmed his progressive foreign policy credentials this morning, citing the £100 billion expenditure over the next 25 years on a Trident successor. 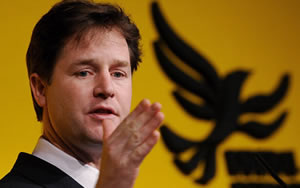 Nick Clegg affirmed his progressive foreign policy credentials this morning, citing the unwarranted near £100 billion expenditure over the next 25 years on the Trident successor.

Answering James Naughtie’s question about more limited nuclear deterrent options the Liberal Democrat leader cited the Astute alternative, which Left Foot Forward has advocated as a smaller scale, less costly alternative to Trident either in the form of a theatre based nuclear deterrence platform achieved through nuclear armed cruise missiles or by maintaining an intercontinental ballistic missile system but using a variant of the existing Astute class as the delivery vehicle rather then committing to the wholescale reaserach, development and construction process for a new submarine type.

“We haven’t yet settled on which of those options. What we’re doing is something the government are refusing to do, and the Conservatives refuse to do – they wont even include it in a future defence review. Whether we have a nuclear deterrent or not depends heavily on whether multi-lateral nuclear disarmament in the non-proliferation talks succeed or not I am a multilateralist

“I believe we should not just be throwing away our nuclear deterrent without any regard to what others are doing; all we are saying is that you shouldn’t rule in the option which we think is neither affordable nor strategically necessary which is the like-for-like replacement of Trident.

“Can I just spell that out for a minute neither of the other two parties accept this. Trident is a cold war nuclear missile system which was designed to flatten Moscow and St Petersburg at the press of a a butoon it will cost us £100 billion over 25 years. I think we are perfectlty entitled to say whatever we do in the fuiture let’s not pretend we either need or can afford the like-for-like replacement of that old cold war nuclear missile system.”

“This nuclear deterrent (Trident) keeps us a nuclear power for another 20 years, the decision is whether we want one for 30 years after that.”