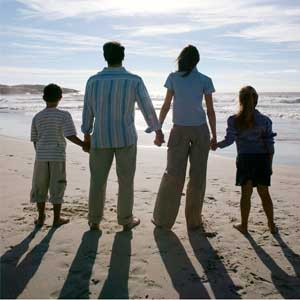 A new campaign called ‘Don’t Judge My Family‘ has launched today. Over 1,500 people have already signed up and pledged to give their £3 a week tax break to charity – a total of £32,500 so far.

As highlighted by Polly Toynbee in today’s Guardian:

“A new campaign launches today, inspired by JK Rowling’s splendidly outspoken attack on the Tory marriage bribe. Don’t Judge My Family, a website set up by a Labour supporter, asks people to sign up to pledge their £150 annual Cameron marriage bribe to donate to one of a list of charities for single mothers, abused wives, war widows and poor families, with everyone posting up photos of their families of all kinds and shapes. Labour and the Lib Dems need more of that.”

The website set out that the policy is judgemental, that other people need the money more, that it won’t work, and that it’s an irresponsible waste of money. It says:

David Cameron’s policy is to ‘send a signal’ that marriage is better than any other type of relationship. Our campaign is ‘sending a signal’ back: don’t judge my family.

In the Independent, Sarah Cassidy, outlines how, “The Conservatives’ promise to give preferential treatment to married couples has mobilised a new force in British politics.” Her article includes a series of disparaging remarks from campaigners:

The independent Institute for Fiscal Studies (IFS) – whose figures the Tories used to justify their plan – questioned whether the proposals would change people’s behaviour. “The incentives to marry – or not to divorce – provided by a policy whose maximum benefit is £150 a year must surely be weak relative to the other costs and benefits involved,” it said.

And the IFS questioned the decision not to target the tax breaks at families with young children. “If encouraging marriage is seen as desirable primarily for the impact that it has on child development, it is not clear that a policy where pensioner families make up more than a third of the beneficiaries is well-targeted.” …

Dr Katherine Rake, head of the Family and Parenting Institute, said: “There is no evidence that this kind of tax break will do anything to incentivise people to get married or stay married. It’s also very expensive. If we are going to invest billions of pounds in tax breaks then shouldn’t we be sure it’s going to work?”

Fiona Weir, chief executive of Gingerbread, the single parents’ charity, said the discussion of Tory tax breaks for married couples has been demoralising for single parents and their children. “Some of the debate has been expressed in extraordinarily stigmatising language, broken homes, feral kids, feckless parents,” she said. “David Cameron tries very hard to avoid stigmatising language and we recognise and appreciate this.

“But when he talks about tax breaks for married couples it makes our members feel like second-class families because it is rewarding marriage as the gold standard. They do not see why someone should get more money simply because they are married.”

Left Foot Forward has previously covered the problems with the policy in detail.