A BNP leader has called for kissing between men to be banned in public. The BNP leader in East Sussex, also attacked the "morals and honesty" of a gay Tory MP. 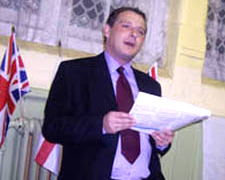 A BNP leader has called for kissing between men to be banned in public. Nick Prince, the BNP leader in East Sussex, also attacked the “morals and honesty” of a gay Conservative MP. Prince attacked Bexhill and Battle MP Greg Barker after criticising gay adoption and same-sex public displays of affection.

“The BNP is completely beyond the pale and I have no intention in entering into a debate with that sort of people.”

Prince’s bigotry follows Iain Dale’s recent interview with Nick Griffin in which the BNP leader claimed his party are “not anti gay” and “have got gay members”, this despite describing men kissing in public as “creepy”, echoing his remarks on Question Time in which he the sight of two men kissing in public was “really creepy”.

In the interview, Griffin’s mask further slipped when he came out against civil partnerships, ranting about “the left’s war against marriage and the family” and the “hard core Marxist left who have infiltrated their ideas into all aspects of our society”.

Elsewhere, a well-connected Tory councillor has also been exposed for making homophobic remarks. Writing on Facebook, Wirral borough councillor Denis Knowles, who defected from Labour in May, said:

“An unusual group of young boys leafletting … of the limp wristed variety and definitely NOT local.”

And last week, Tory leader David Cameron floundered badly in an interview with Gay Times, broadcast on Channel Four News. In it, he failed to commit to supporting the Alli amendment in the Lords which would allow civil partnership ceremonies to be performed on religious premises and once again defended the Tories’ far-Right allies in the European parliament.

17 Responses to “BNP candidate’s homophobic attack “beyond the pale””