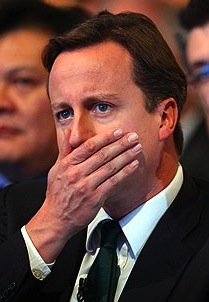 The Conservatives week has started badly. The Guardian highlights another “butter-fingered operation of the calculator” as the Tories get their sums wrong again. A Conservative party attack document, ‘Labour’s Two Nations’, claimed – three times – that women under 18 are “three times more likely to fall pregnant in the most deprived areas compared to the least deprived areas. In the most deprived areas 54% are likely to fall pregnant before the age of 18, compared to just 19% in the least deprived areas.” The figure was out by a factor of ten and is coming down. Meanwhile, the Telegraph outlines that shadow school secretary, Michael Gove, admitted that there was “rumbling and grumbling” about David Cameron’s modernization while a ComRes poll for the Independent on Sunday found that 56 per cent of voters distrusted Mr Cameron, agreeing that he was a “slick salesmen”. And the woman at the centre of the storm over the candidacy of David Cameron’s friend, Joanne Cash, has insisted – according to the Times – that she and her supporters are not “dinosaurs,” a reference to remarks posted on Ms Cash’s twitter feed.

The Tories have also briefed a series of policies. The Financial Times reports that, “The private sector would be handed a far bigger slice of the £3.2bn prisons and probation market” with companies running after-prison welfare programmes being “paid by results” for keeping an individual out of jail for fixed periods such as six months, a year or two years. The Telegraph reports comments made by David Cameron to the Politics Show Scotland that he will “hand Scotland more powers during the first term of a Conservative government to the make the UK “a happier family”.” On the Today programme, George Osborne announced a “radical power shift” to allow public sector workers to form cooperatives.

The Times front page contains a shocking picture of its journalist being physically removed from a BNP meeting, “hit in the back and had my face squashed.” The reporter, Dominic Kennedy, was initially invited into the meeting in East London where the BNP announced a change to their membership rules but removed after it emerged he wrote for the Times. Nick Griffin was later quoted saying, “[The Times] lies and it lies and it lies about this party.” The Telegraph has a straight report of the meeting under the headline, “BNP votes to allow non-white members.”

The Guardian reports that Nick Clegg is “planning to rule out forming a coalition government with either the Conservatives or Labour” in the event of a hung parliament. Instead, the party will appeal for a “shopping list” of four policies: Investing extra funds in education through a pupil premium for disadvantaged children; tax reform, taking 4 million out of tax and raising taxes on the rich by requiring capital gains and income to be taxed at the same rate; rebalancing of the economy to put less emphasis on centralised banking and more on a new greener economy; and political reforms, including changes to the voting system and a democratically elected Lords, that go further than proposed by Labour.

The Times reports that Ministers are urging Gordon Brown to adopt a ‘masochism strategy’ to brave the “wrath of voters in person during the general election campaign to prove that he understands their concerns.” After last night’s personal interview on ITV, a separate story speculates that, “aides are now discussing whether the chat with Piers Morgan should be the exception or, in the run-up to polling day, the new rule.” The paper quotes Paul Staines, founder of the Guido Fawkes blog: “He came over as pretty sympathetic … It’s the best I’ve seen him do, though whether it will be remembered next week is a different thing altogether.” Michael White in the Guardian is more acerbic: “Voters may feel sorry for him, but in the wrong way.”