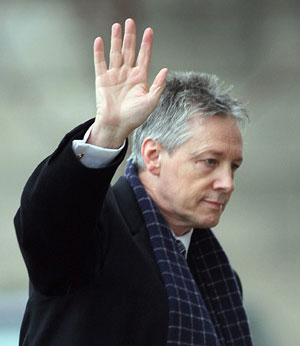 The FT reports that a deal to devolve policing responsibilities to Northern Ireland was struck early this morning when the Democratic Unionists secured the backing of its assembly members after marathon talks with Sinn Féin. Full devolution is expected to take place “around the beginning of May.” The Guardian hails, “one of the most significant milestones in the Northern Ireland peace process” and reports that Gordon Brown and Brian Cowen, his Irish counterpart, were flying to Belfast early this morning to “set the seal on an historic deal”. In a two-hour meeting last night, Robinson persuaded the doubters in his party that he had secured assurances in two key areas. First, the parades commission, seen by many Unionists as biased against Orange parades, would be reformed. Second, that Sinn Féin would not be able to dictate to the new justice minister.

The Telegraph, Times and Guardian all lead with the expenses crisis. 390 MPs were ordered to repay £1.1m of inappropriate expenses and several were braced to hear whether the Crown Prosecution Service would pursue criminal charges. But Sir Thomas Legg’s inquiry, which cost £1.16m to compile, came under fire for being “sloppy” and “illogical.” The FT reports that Sir Paul Kennedy, the former judge who was asked by the Commons to rule on appeals from MPs, said he was “troubled” by the idea that “legitimate transactions” had in retrospect been described as “tainted” or “wholly invalid”. The Times reports that, “Parliament’s exclusive banqueting facilities have been made available by MPs to outside bodies with which they have financial links” with David Cameron regularly breaking the strict rules because he had not read the rule book properly, according to the Independent. The Guardian has an interactive feature for readers to submit who MPs have “been having for dinner?”

The Independent front page and Times cover Chris Grayling’s “stinging rebuke for manipulating official statistics.” The shadow home secretary received a letter from Sir Michael Scholar, chairman of the UK Statistics Authority, which said, “I do not wish to become involved in political controversy but I must take issue with what you said about violent crime statistics, which seems to me likely to damage public trust in official statistics … where we see that official statistics have been presented or quoted in a way that seems likely to mislead the public, we will publicly draw this to the attention of those involved.” Every prospective Labour candidate has been sent a draft letter to send to their Tory opponent, asking for an undertaking not to use “bogus statistics” in the coming campaign.

The Independent reports that Alastair Campbell is to coach Gordon Brown ahead of his “showpiece interview” with Piers Morgan. The Prime Minister is due to appear on Piers Morgan’s Life Stories on 14 February. Mr Campbell said: “He should be himself. If he’s a bit grumpy, be grumpy, if he’s feeling cheery, be cheery. It would be a great opportunity for Gordon to engage in a different way from how he’s normally filtered and portrayed through the media. If Gordon answers the question and is authentic and says things as they are, the public will engage in that.”

The FT says that “Britain’s government bond markets remained an oasis of calm” after the Bank of England suspended its quantitative easing programme of creating money. According to the paper, “investors had expected the Bank’s well-signalled move and did not indicate concern at the government’s ability to finance debt in the future.” After starting the week claiming that cuts in 2010 would not be “swingeing” or “particularly extensive,” the same paper say that, “Osborne argues for tough cuts”. The Conservatives now suggest that the move made it “even more important” for an incoming Tory government to make inroads into the £178bn budget deficit. The Mirror has a stinging portrait of “cabin boy George … [the] ineffectual shadow chancellor.”