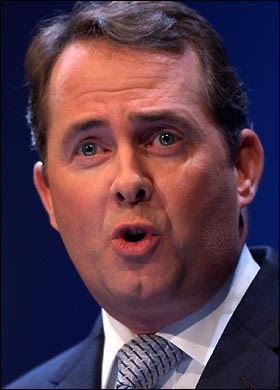 A Conservative charity, set up by Liam Fox, is being investigated by the Charity Commission. The Atlantic Bridge – which boasts five shadow cabinet ministers on its advisory council including George Osborne and William Hague, as well as Fox – claims its mission statement is, “the simple aim of ‘Strengthening the Special Relationship’ exemplified by the Reagan-Thatcher partnership of the 1980s.”

But blogger Stephen Newton has filed a complaint to the regulator, now being investigated, highlighting the political nature of the charity.

Newton writes on his blog today:

“Typical Atlantic Bridge activities include paying for Tory MPs to visit Washington to meet fellow Conservatives, or to have dinner in Los Angeles with Fox News personalities. No similar opportunities are offered to politicians from other parties or any attempts made to share what they have learned with the wider public.

“In 2006, Liam Fox gave an unashamedly party political interview to the Pittsburgh Tribune-Review. It reported that he was in Pittsburgh, ‘to promote The Atlantic Bridge, an organization he founded in 1997 to build close personal and political relationships between American and British conservatives.’”

“Trustees of charitable ‘think tanks’ have a responsibility to ensure the political neutrality of the work they do. When a charity operates close to the political environment, it must safeguard its independence and ensure that any involvement it has with political parties is balanced.”