The right-wing media had something of a field-day following Tory MP Lee Anderson's clash with Steve Bray – aka ‘Stop Brexit Man.’ 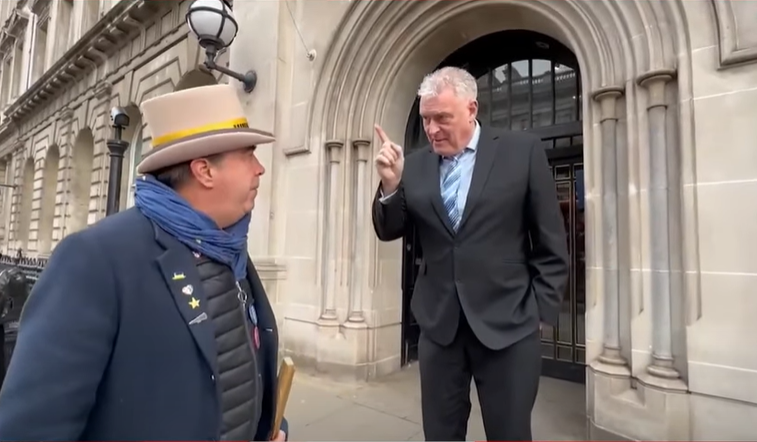 The incident took place outside the Houses of Parliament this week. The anti-Brexit campaigner asked Lee Anderson: “How are the subsidised meals going Lee? Looks like you’re benefitting from them.”

The jibe, which was of course a dig at the Anderson’s controversial comments when visiting a food bank in his constituency that he has proven people can make meals costing 30p and that “generation after generation” of people “cannot budget” or make meals properly, didn’t go down well with the MP for Ashford, who hit back:

Visibly irritated, Anderson proceeded to snatch Bray’s hat from his head, which led to a short scuffle, and Bray calling the MP a “piece of sh*t.”

As the footage of the fracas quickly went viral on social media, the right-wing media relished in reporting the story.

The altercation was the focus of discussion between GB News’ presenter Dan Wootton – who once clashed with a guest for questioning the successes of Brexit – and Lee Anderson on the right-wing channel’s ‘The Real World with Lee Anderson.’

In the explainer to the clip, Wootton described Bray, with much delight, as an “infamous loser.” Following broadcast of the footage, the outspoken presenter guffawed: “Lee, he almost lamped you there,” adding: “He can’t take a piece of his own medicine that utter loser.”

You’d think the pair were discussing the theatrics of a soap opera rather than a real-life activist standing up for what he believes in. “It’s about time he was carted off to a funny farm” and the “man’s an absolute loser,” said the Tory MP, adding that he “doesn’t know what he does for a living, I don’t think he does anything for a living.”

This week’s clash outside Westminster isn’t the first time Anderson has called Bray a ‘parasite.’

In April 2022, the Tory MP launched a verbal tirade on the anti-Brexit protestor outside Parliament, telling him: “You’re nothing but a parasite.” Bray had asked Anderson if he would still be supporting “liar” Boris Johnson to stay as prime minster. Appearing angered by the question, the MP stated: “At least I’ve got a job to lose, you haven’t got one.”

But the MP replied: “You’re nothing but a parasite. We’ve established that. You’re a scrounger. Why are you here dressed like a tramp?”

In July 2021, a video emerged of a previous clash between Bray and Anderson – in which the MP again called the activist a “parasite” while drinking in a Westminster pub.

One might hope that MPs would refrain from using such derogatory, provocative language, especially in relation to people without a job.

In response to the GB News’ discussion about latest Anderson/Bray clash, viewers didn’t hold back in taunting the Tory MP and sharing their support towards Bray.

“Ironic, as Lee Anderson will shortly be looking for a job too,” tweeted one bemused viewer.

Another pointed out how it was the MP who approached the activist and instigated the contact.