Campaigners beamed scenes from a documentary about the energy crisis onto the prime minister’s £1.5m Georgian manor house in North Yorkshire. 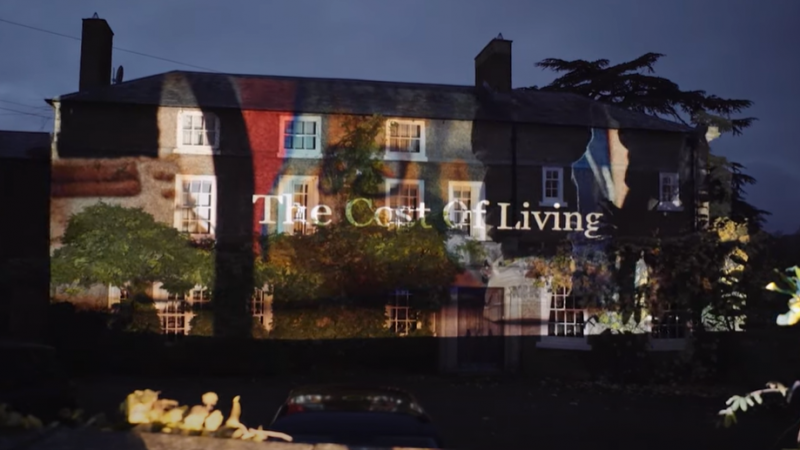 The film is focused on a community which is struggling to pay energy bills and living with fuel poverty. It reminds that energy companies are to make in the excess of £170bn in profits over the next two years, and documents how it would cost ‘just’ £55bn to insulate all homes in Britain, which are among the draughtiest and coldest in Europe.

Campaigners played the nine-minute film twice at the prime minister’s constituency home on the eve of the autumn statement.

The documentary is titled ‘The Cost of Living Crisis’ and was made by Greenpeace in partnership with the New Economics Foundation, a social justice think-tank. It follows the story of a community that is struggling with the escalating economic crisis.

Greenpeace-commissioned polling, released on November 17, confirms that the issues the community are facing in the documentary are a nationwide problem, especially in ‘Red Wall’ constituencies, which switched to Conservative in the 2019 general election. The two main causes of concern for households are soaring energy bills and the UK having some of the coldest, draughtiest homes in Western Europe.

According to the End Fuel Poverty Coalition, a broad coalition of anti-poverty, environmental, health and housing campaigners, trade unions, local authorities and charities, almost 7 million households – around a quarter of the country – are already in fuel poverty. Without further government intervention, this is expected to rise to 11 million next year.

Greenpeace is calling for the government to spend at least £6bn on implementing an energy efficiency and national insulation programme.

Heather Kennedy, a community organiser for the New Economics Foundation who helped produce the film, says the circumstances people are being forced to live with in the documentary, will be familiar for people across the UK.

“After the longest fall in incomes on modern records, and over a decade of underfunded, crumbling public services, we are being hit with inflated energy costs that are making fossil fuel companies rich and us poor. The rise in energy prices is made much worse by our poorly insulated, leaky homes, which waste our money every time we turn on our heating,” said Kennedy.

“Our prime minister Rishi Sunak should kick-start a national programme of home upgrades to insulate Britain’s cold, draughty homes this winter. This programme would bring down people’s energy bills now and in the future, and keep people warm in their homes. The faster we do it, the more carbon, money and lives we’ll save,” she added.

A report released by Greenpeace in September, which builds on the work carried out by Cambridge Econometrics in 2021, suggests that a government-backed drive to insulate homes and install heat pumps could bring almost £7bn to the economy a year, on top of creating nearly 140,000 new jobs by 2030.

Greenpeace’s UK political campaigner Ami McCarthy said that the chancellor may be making the right noises around home insulation and the windfall tax, but the “action doesn’t live up to the hype.”

“Increasing taxes on the obscene profits of oil and gas giants is the right thing to do, but allowing huge tax breaks for more fossil fuel drilling is one step forward and two back. The government could lose billions in revenues while turning a fairness tax into an incentive to fuel the climate crisis – and during a major climate summit! Instead of going to increase the problem, this money should fund solutions, including better support for millions of households still struggling to pay their bills.

“The chancellor also paid lip service to home insulation, but where’s the emergency plan we need to fix our draughty, energy-wasting houses? A promise of more money in three years’ time helps no one. The government should launch a nationwide warm homes programme now that can save households £10bn a year on energy bills and lift people out of fuel poverty. The sooner we get going the sooner we’ll reap the rewards of more affordable bills, more energy security and more stable climate,” McCarthy added.