The paper seems to have forgotten that Tory MP Michael Gove, also supported removing the charitable status of private schools. 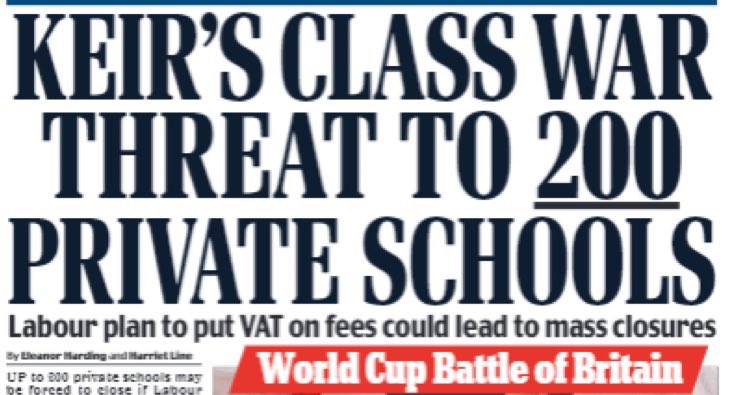 The Daily Mail has spent yet another day taking aim at the Labour Party for daring to tackle educational inequality and wanting to level the playing field between state and private schools, and once more it’s rightly been mocked for its latest front page on the issue.

With the Labour Party reiterating its pledge to remove the charitable status of private schools, the Mail’s front page today featured the headline: “Keir’s class war threat to 200 private schools’. Keir Starmer has vowed to make private schools pay VAT and the Daily Mail has had a complete melt down.

The paper seems to have forgotten that Tory MP Michael Gove, also supported removing the charitable status of private schools.

Writing in The Times in 2017, the leading Tory MP said: “Private school fees are VAT-exempt. That tax advantage allows the wealthiest in this country, indeed the very wealthiest in the globe, to buy a prestige service that secures their children a permanent positional edge in society at an effective 20 per cent discount.

“How can this be justified? I ask the question in genuine, honest inquiry. If Times readers can tell me why we should continue to provide such egregious state support to the already wealthy so that they might buy advantage for their own children, I would be fascinated.”

Andy Burnham also took aim at the Mail today, tweeting: “In a cost-of-living crisis, the Daily Mail tries to make private school fees the biggest issue of the day.”

What’s also interesting is how the Daily Mail portrays the issue as one of ‘class war’. So here’s a question for the paper. Over the past decade, the most deprived fifth of secondary schools saw a 14% real-terms fall in spending per pupil between 2009 and 2019, compared with a 9% drop for the least deprived schools.

Would they describe that as ‘class war’ too?