A legal challenge over the supply of UK-made weapons for the war in Yemen will proceed to the High Court in January 2023. 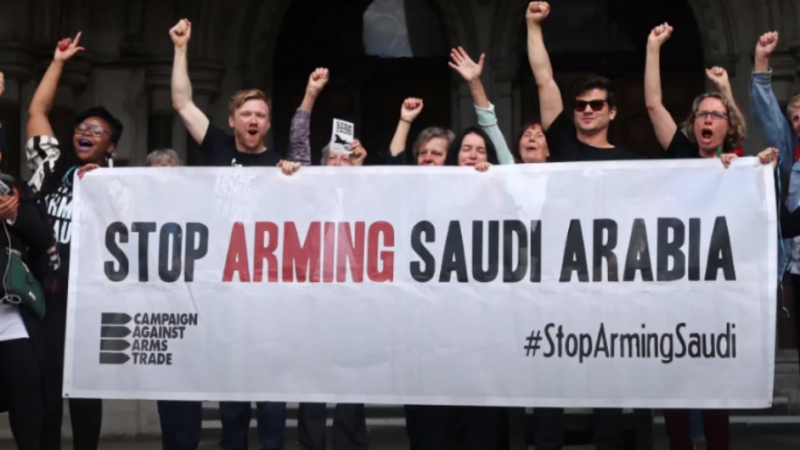 Legal action against the UK’s complicity in the Yemen war has been listed for hearing by the High Court.

The announcement comes as hopes of peace in a country ravaged by eight years of conflict are raised, as warring parties agree to renew an existing truce for another two months.

The legal case was launched by Campaign Against Arms Trade (CAAT), a UK-based organisation which works to end international arms trade. The High Court has confirmed that the case to challenge the government over the supply of arms from the UK for the Yemen war has been listed for hearing on January 31 – February 2, 2023.

In June 2019, the Court of Appeal ruled that the UK government had acted unlawfully when it licensed the sale of UK-made arms to Saudi-led forces for use in Yemen and banned new arms sales to Saudi Arabia.

However, following a review by the Department of International Trade in July 2020 which concluded that any violations of International Humanitarian Law (IHL) committed by the Saudi coalition were ‘isolated incidents’, the then international trade secretary Liz Truss announced the resumption of full arms sales to Saudi, including bombs and missiles used by Typhoon jets part-made by Britain’s BAE Systems.

In October 2020, CAAT filed a new Judicial Review application into the legality of the UK government’s decision to renew arms sales to the Saudi-led coalition that is bombing Yemen. At the time, CAAT said:

“The government may think that the widespread destruction of schools, hospitals and homes can be dismissed as ‘isolated incidents’ but we do not.”

In April 2021, CAAT was granted permission for its legal challenge against the UK’s government’s decision to renew arms sales for use in the war in Yemen to proceed to the High Court.

The anti-arms trade campaigners recently confirmed that their legal case to challenge the government over the supply of UK-made weapons for the conflict is to proceed in the High Court in January 2023.

The war in Yemen began in late 2014 when the capital city Sanaa was captured by the Houthis, an Islamist political and armed movement belonging to the Zaydi sect of Shi’ite Islam with a power base in the north. In March 2015, a coalition of Gulf states led by Saudi Arabia launched a campaign of air strikes and economic isolation against the Houthi insurgents.

With an estimated 24 million people – close to 80 per cent of the population – in need of assistance and protection, in 2019 the UN warned that the humanitarian crisis in Yemen was the worse in the world.

Confirmation that UK arms sales to Yemen are to go on trial in 2023 comes as the United Nations announces a two-month extension to a ceasefire. A nationwide two-month truce began on April 2, 2022, following an agreement between the warring parties.

“I am pleased to announce that the parties have agreed to extend the truce, under the same conditions, for two additional months from August 2, 2022 to October 2, 2022”, Hans Grundberg, UN envoy to the United Nations, said on August 2.

Since the truce agreement began on April 2, the number of civilians killed and injured in Yemen has dropped by more than 50%. Data from the Civilian Impact Monitoring Project shows that in the month before the announcement of the truce, 213 civilians were killed or injured in the war. The following month, this was reduced to 95.

“The figures provide clear proof of the benefits from the truce. During the last month, many families were spared from having their lives shattered by the loss of family members to a meaningless war. For the sake of the Yemeni people and their future, we hope the parties to the conflict will extend the truce,” said Erin Hutchinson, Yemen Country director for the Norwegian Refugee Council.

UK complicity in the war

CAAT estimates that since the bombing in Yemen began, the real value of UK arms licensed for export to the Saudi-led coalition is over £23 billion. The UN has estimated that the war in Yemen had killed 377,000 people by the end of 2021, through direct and indirect causes.

High Court judges will now consider whether the government’s decision to resume arms sales is lawful.

“This new ruling is an important step forward, increasing the pressure for the UK government to finally end the arms sales fuelling the war in Yemen crisis,” says CAAT.

LFF reached out to the Department International Trade (DIT) for commentary on the hearing and how the UK continues to supply arms to Saudi for the conflict in Yemen. A DIT spokesperson said they cannot comment on ongoing legal proceedings, but said:

“We consider all our export applications thoroughly against a strict risk assessment framework and keep all licences under careful and continual review as standard.”