The UK government’s ‘shambolic’ refugee response is in the spotlight on UN Anti-Racism Day, amid calls for the safe passage of all people fleeing war. 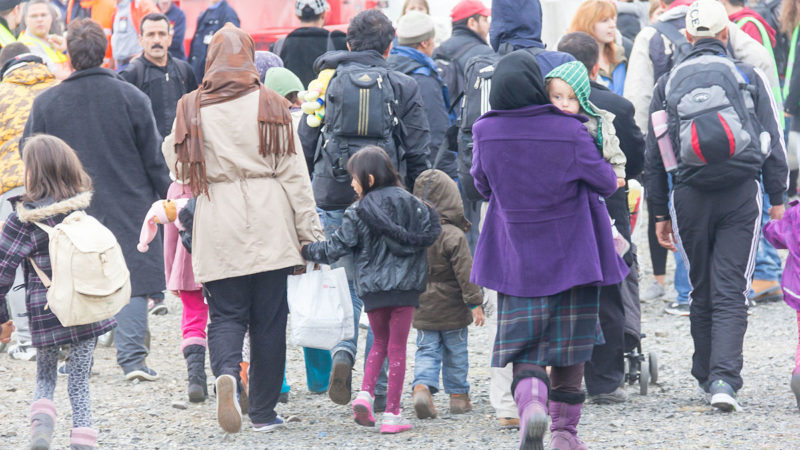 To mark the United Nations’ Anti-Racism Day, campaigners are taking to the streets across the UK today in a series of anti-racism protests.

Also known as the International Day for the Elimination of Racial Discrimination, the UN Anti-Racism Day is observed annually on March 21. This was the day that – in 1960 – police officers fired at peaceful protestors in South Africa, who were campaigning against racist apartheid. 69 people were killed and 180 injured at the deadly protest.

The date was declared an international day in 1966, when the UN called on the international community to bolster efforts to abolish racial discrimination in all its forms.

This weekend, campaigners are petitioning the UK to make all refugees welcome, including those from outside Europe. The protestors are also fighting against the ‘inhumane’ Nationality and Borders Bill, which is condemned for “stopping refugees and asylum seeker from seeking safety.”

The events, which are organised by Stand Up To Racism (SUTR) and supported by the TUC, are are taking place in London, Glasgow and Cardiff, and many other cities and towns, not only in the UK, but around the world.

Weyman Bennett, co-convener of SUTR, said: “Around the world, the growth of racist populism and its interaction with the far right and fascism is a sharpening problem we face as anti-racists in our respective countries in one way or another.

“Amidst an ecological, economic and pandemic crisis, we see governments and racist, far-right and fascist forces utilise racism to divide people and divert our gaze from those to blame.

“We need to stand up, and march together in our tens of thousands on March 19 — Black Lives Matter, and we need to build mass anti-racist movements built on black and white unity to crush the threat of racist division.”

Since the start of Russia’s invasion of Ukraine, the UN estimates more than 3 million people have been displaced from their homes.

Moldova and Poland – Europe’s poorest countries – have taken in the highest proportion of Ukrainian refugees. Sabby Dhalu, joint secretary of SUTR, notes how, “Britain is bottom of the refugee table” and that the government’s response to the crisis has been a “shambles.”

Dhalu goes on to say how the government’s latest immigration policy announcement, the ‘Homes for Ukraine,’ scheme relies on the compassion of individuals to register their interest to provide accommodation for refugees arriving from Ukraine.

“A serious refugee policy cannot be based only on kind-hearted, generous individuals and the voluntary sector,” says Dhalu, adding how the refugees are still required to apply for a visa before entering Britain.

“Expecting people fleeing a war-torn country to complete a long and complicated form for a visa with no processing timescale is a disgrace. Refugees should not be caught up in red tape,” writes SUTR’s joint secretary.

Dhali also informs how the government is failing its duty to provide sanctuary for refugees escaping wars in Afghanistan, Iraq, Syria, Yemen, Ethiopia and Sudan.

“The government has offered Britons £350 a month to house refugees fleeing the Ukrainian war – but where was this response for Afghan or Syrian refugees?

“The double standards shown throughout the crisis has exposed the government’s long-standing racist attitudes towards African, South Asian, and Arab refugees/asylum seekers.

Today’s protests are calling on the government to scrap the Nationality and Borders Bill, which SUTR describes as “criminalising asylum-seekers and undermining the right to seek asylum.”

This week saw Filippo Grandi, the UN’s high commissioner for refugees., express similar concerns. During a four-day visit to Afghanistan, Grandi said Russia’s invasion of Ukraine must not make the world forget Afghanistan.

Talking to AFP at a UN compound in the Afghan capital, Grandi warned that ignoring Afghanistan’s humanitarian needs could be very risky.

“The whole attention of the world at the moment is focused on Ukraine.

“But my message coming here is, don’t forget the other situations, where attention and resources are needed, and Afghanistan is one of them.

“The risks of distraction are very high, very high … humanitarian assistance has to flow no matter how many other crises compete with Afghanistan around the world.”