A cantankerous column by Douglas Murray attempts to incite friction towards the NHS while pushing the blame of its problems onto the wrong hands. 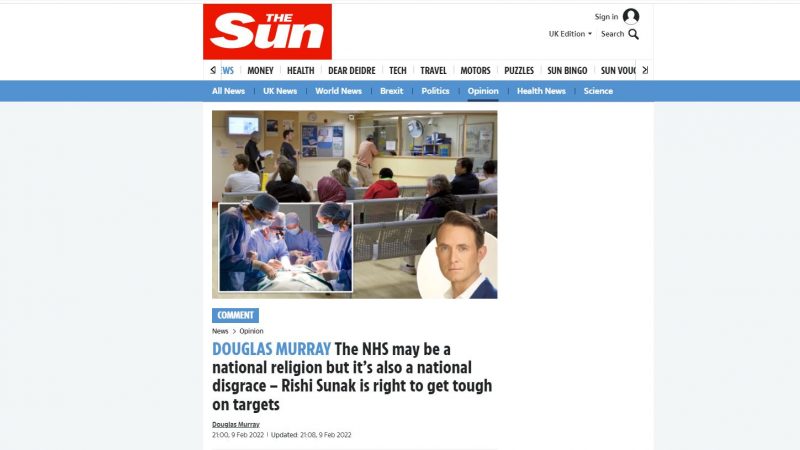 Posing as a ‘man of the people’, Douglas Murray – a prominent neoconservative ideologue who is associate editor of The Spectator – talks of how the NHS might be a ‘national religion’ but it is also a ‘national disgrace.’

Writing for the tabloid newspaper on February 9, Murray – who once said, to have less terrorism in the UK needs “less Islam,” – describes the National Health Service as a “vast, inefficient blob,” and that Rishi Sunak is right to get tough on targets.

The only reason why the country was locked down “so hard and fast”, was, according to Murray, “to protect the NHS,” who proceeds to talk about how the health service is “meant to be there to protect us.”

Citing pre-pandemic figures of 4.4 million people awaiting surgery, the right-wing pundit says that even before the pandemic “this was a national scandal” and that the NHS is “only the envy of the Third World.”

Indeed, the author is right when he talks of the pressure the NHS was under before the pandemic.

Having been founded by the Labour Party in 1945, Murray’s belligerent comment that Labour “constantly tries to present itself as the champion of the health service” could be seen as justifiable from Labour’s viewpoint.

In 2018 – under a Tory government – the UK experienced the worse A&E performance figures to date, and the health service was, indeed, in a “critical condition.”

Tory-imposed austerity is constantly linked to an under-pressure, overloaded and under-funded health service.

A study published in October 2021 found that austerity cuts to the NHS, public health and social care, have killed tens of thousands more people in England than expected.

Researchers who analysed the joint impact of cuts to healthcare, public health and social care since 2010 – when austerity was imposed by the then chancellor George Osborne – found that even in just the following four years, the spending squeeze was linked with 57,550 more deaths than would have been expected.

“Restrictions on the growth in health and social care expenditure during ‘austerity’ have been associated with tens of thousands more deaths than would have been observed had pre-austerity expenditure growth been sustained,” said Prof Karl Claxton of the Centre for Health Economics at the University of York.

“This is a devastating verdict on a decade of Tory austerity in healthcare,” the shadow health secretary Jonathan Ashworth had said in response to the findings.

But according to Douglas Murray, if Rishi Sunak just keeps “funnelling more and more money into an unreformed health service” there is “no way” it will improve.

The author continues that the public are “grateful” for the frontline health workers who “worked away” at serious personal risk during the pandemic. But what we are not grateful for, according to Murray, is the “dire waiting times” and “lack of in-person appointments.”

A ‘slap in the face’

Warnings have been made that NHS backlog plan, which was due out this week but was delayed, will never work without tens of thousands of extra staff in place to help achieve the ‘tough’ targets Murray insists Rishi Sunak is right to make.

A proposed 1% pay rise for NHS staff in 2021 – when we were still in the throes of the pandemic – was described as a “slap in the face.” The Royal Nursing College (RCN) said the pay rise had reinforced some of their members’ belief “that they are not valued by either the government or perhaps some of the public.”

By giving hardworking NHS staff who are battling stress and burnout, the pay rises they deserve, perhaps not so many nurses and other NHS professionals would be quitting their jobs and 62% of hospitals would not be reporting a nurse vacancy rate higher than 7.5%.

Perhaps then we would not have to endure the ‘dire waiting times’ Murray contends we are ‘not grateful for.’

According to Murray, Labour is also “spinning the lie” that the Conservatives are trying somehow to “sell off” the NHS.

With cronyism and outsourcing having defined the government’s response to the pandemic – which saw PPE suppliers and Covid testing providers with Tory connections gain contracts – and the gradual hollowing out of the health service to private companies, it’s hard to see how Labour is “spinning a lie” by warning of NHS privatisation under the Tories.

Even Sir David King, former chief scientific adviser, and the special representative for climate change under Boris Johnson when he was foreign secretary, told the Guardian, the government is slipping through plans to “effectively privatise the NHS by stealth”

Fortunately, the article was recognised for what it actually is by some Twitter – a hate-fuelled propagandist piece that demeans the plight of the NHS and its industrious, burnt-out workforce and pushes the blame onto the wrong hands.

“It is conservatives like you and Rishi that have ruined the NHS. People of your ilk should leave it alone unless you are seeking medical treatment. Reprehensible people with reprehensible ideology, who are intent on ruining vital public services that people rely on,” read one post.

Sadly, pushing such hard-right positions into the likes of The Sun, can have its desired impact, and in this case, to propagandise against the NHS.

As someone pointed out in response to Murray promoting his article on Twitter:

“Reading some of the responses on here, it’s clear you attract some quiet unpleasant people. Your tweets are akin to low hanging fruit, full of trigger points. Sad.”