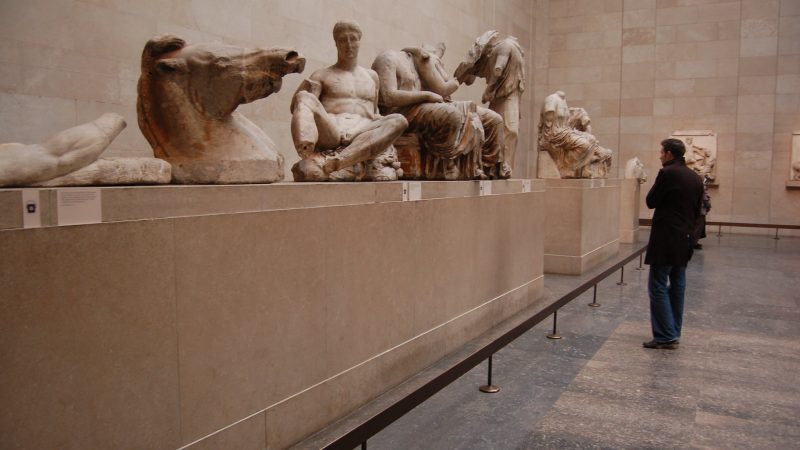 Ben Bradley accused the National Trust of trying to ‘rewrite history’ by publishing a report about its properties connected to the slave trade. The Mail has called those challenging conservative historical narratives ‘ideologues who hold our heritage in contempt’. Cultural heritage and the culture industries across Britain are certainly under threat, but from whom?

This culture war discourse obscures a real battle about what kind of heritage is worth protecting. For the government, some heritage is certainly more valuable than others. They certainly did not value the Dorman Long Tower, a brutalist building considered a symbol of Teeside’s industrial heritage, which was demolished in September 2021 after its Grade II listed status was revoked by Culture Minister Nadine Dorries.

Many other modernist buildings like BBC Broadcasting House Cardiff, and the old Marks and Spencer building on Oxford Street, London, have been deemed to not be architecturally worthy enough and condemned to demolition and redevelopment.

Austerity cuts to council budgets have resulted in the closure of almost 800 libraries since 2010, depriving communities of access to knowledge and education about their local history.

Instead of trying to broaden access to knowledge, especially knowledge which is not so flattering to nationalist historical myths, groups like the ‘Restore Trust’ have been attempting to take control of the National Trust’s governing council to prevent discussion of the role of slavery in British history.

Professor Dan Hicks, a curator at Oxford’s Pitt Rivers museum has criticised “ministers carping on about the Colston verdict while actual heritage is being destroyed on their watch because of their relentless cuts to arts/museum funding”. He cited the decision of Stoke Council to slash budgets at its Pottery Museum, making curators redundant and closing the museum for half the year.

Cultural departments at universities are also feeling the pressure of academic marketisation, as students are pushed towards courses which promise more lucrative careers. Sheffield University announced the closure of its archaeology department in 2021.

And plans to dig a highway under Stonehenge are still moving forward, despite a High Court judge ruling the £1.7 billion scheme was unlawful. National Highways has been making its case for the project, with Transport Secretary Grant Shapps ‘redetermining’ his decision on the project in due course. Unesco has warned that the monument’s World Heritage status is under threat because of ‘substantial harm’ that could be caused by the roadbuilding which will be within the World Heritage site.

The Tories’ Police and Crime Bill will set the maximum sentence for damaging a statue to 10 years, twice the sentence you can get for a conviction for Actual Bodily Harm on another human being.

Furthermore, some galleries at the British Museum have been off display for almost a year due to the need for maintenance work. The Art Newspaper reported in November that “The poor condition of the Greek rooms and neighbouring Assyrian galleries has been noted many times. In 2018, Greek television broadcast images of water dripping into the Parthenon Marbles gallery, with the Greek culture minister, Lina Mendoni, responding that it “reinforces Greece’s rightful demand for the sculptures’ permanent return to Athens”.”

Ironically, I reported last week that James Delingpole and Toby Young had been fantasising on their podcast that the acquittal of the Colston Four would mean that activists “might well pull down the Elgin Marbles and whisk them off to the Greek embassy and say ‘here, have your marbles back!’” Perhaps they would be safer in Greece than in a crumbling British Museum.

The Museums Association has been warning for years that continued cuts to the sector puts heritage and the public’s access to it at risk, saying that, “the impact of funding cuts has been felt across the museums sector, resulting in redundancies, loss of skills and expertise, reduced opening hours and, in some notable cases, museum closures. We are concerned that further cuts will put more museums at risk of closure, and will undermine the ability of others to deliver a high quality service.”

Much of the damage being done is to regional museums and galleries, and the collections languishing in their storerooms, something the Guardian, FT, and numerous academics have been warning about for years.

However, it is particularly telling that the British Museum is now in a state of disrepair, because it is, after all, filled with the spoils of British colonialism, plundered from its imperialist possessions. Professor Dan Hicks’ book The Brutish Museums, recounts how the British military conducted a punitive raid on Benin City in 1897, essentially because its rulers refused to open their markets for free trade. Many of the Benin Bronzes which were taken as loot by British soldiers found their way into the British Museum and other collections around the world.

The architects of British imperialism never cared about African heritage. It was used simply to show the superiority of white, British culture over its subject peoples. Now that the British state is itself crumbling, we can see how little our government cares for the value of British culture and heritage unless it can be used to support their own narratives and hold on power.