Dependence on food banks is still “well above” what it was before the pandemic, with emergency parcels feeding children on the rise, says Britain’s leading food bank charity. 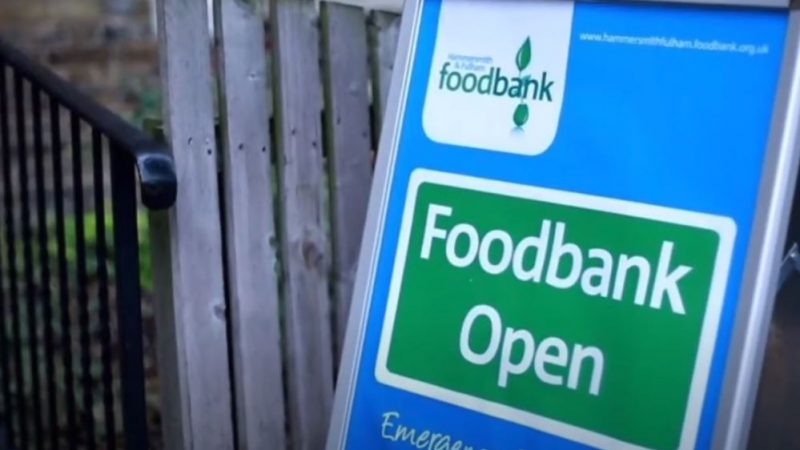 Figures from the Trussell Trust, an NGO and charity that works to end poverty and hunger in the UK and stop the need for food banks, show an alarming increase in food bank demand.

In the six months to October 2021, the charity handed out more than 935,749 parcels. Out of these parcels, more than a third went to families with children.

This equates to over 5,100 emergency food and essential item packages being provided to people every day, including around 2,000 children.

Every parcel from the Trussell Trust comprises of enough food for three meals a day for three days, meaning that between April and September this year, 8.4 meals were distributed, equating to 32 meals every minute.

The Trussell Trust says this represents an 11% increase from the same period in 2019., with the number of packages donated to children rising at twice the rate of those handed to adults.

Compared to 2016, today’s figures represent an increase of almost three-quarters (74%).

As more and more people across the UK face destitution with inflation, rising fuel costs and the end of the £20-a-week uplift to Universal Credit (UC) meaning they are struggling to afford basic living essentials to eat and stay warm, the Trussell Trust says it expects food bank reliance to increase during the winter. The charity warns that parcels distributed by food banks will rise to more than 7,000 a day.

Actual figures will be much higher

These figures are exclusive to the Trussell Trust and do not include the number of parcels distributed by other organisations and independent food banks, meaning the actual number of people using food banks in the UK will be much higher.

Rising food insecurity is sadly prevalent up and down the country. As of April 2021, London had seen a 106% increase in the number of food parcels distributed, making it the only region in Britain where demand for food bank use had doubled in the last year.

In the northwest, in the Derbyshire town of Buxton, demand for the services of the local High Peak Foodbank increased so significantly, that the charity was forced to expand to a bigger venue.

An ‘unprecedented’ rise of people forced into hardship

After seeing an ‘unprecedented’ rise in the number of people forced into hardship in recent months, a homelessness charity in the northeast has launched an urgent appeal calling on people to donate money to help provide a warm meal to someone in need on Christmas Eve.

North East Homeless says that job losses coupled with cuts to universal credit have meant that people who never once thought they would have to relay on food bank are now requiring support.

Talking about the growing demand for food banks, Emma Revie, chief executive of the Trussell Trust, said: “Everyone in the UK should be able to afford the essentials – to buy their own food and heat their homes. Yet food banks in our network continue to see more and more people facing destitution with an increase in food parcels going to children. This is not right.”

Jonathan Reynolds, Labour’s shadow work and pensions secretary, said: “Thousands of food parcels given out every day to kids is frankly a disgrace. Britain deserves better than this.”

According to the government, changes to UC will mean claimants benefit from a newly reduced taper rate and increased work allowance. Additionally, the government claims a Household Support Fund will help vulnerable families afford essential items.

In response to the issue of rising food bank reliance, a government spokesperson said: “We are committed to supporting people on low incomes and the changes we have made to Universal Credit will see nearly two million of the lowest paid better off by around £1,000 a year.”

Billy McGranaghan, founder of Dad’s House,  a food bank located in an upmarket neighbourhood of west London, says the UC cuts have forced some of his clients to make difficult choices.

“(They will) have a salad on a cold October night instead of actually having something that they could have put in the oven. That’s the reality of losing £20 a week — it’s heating or eating,” he said.