As Amazon prepares to make £2bn in UK Black Friday sales, campaigners targeted the company's distribution centres in protest of the multinational’s treatment of workers. 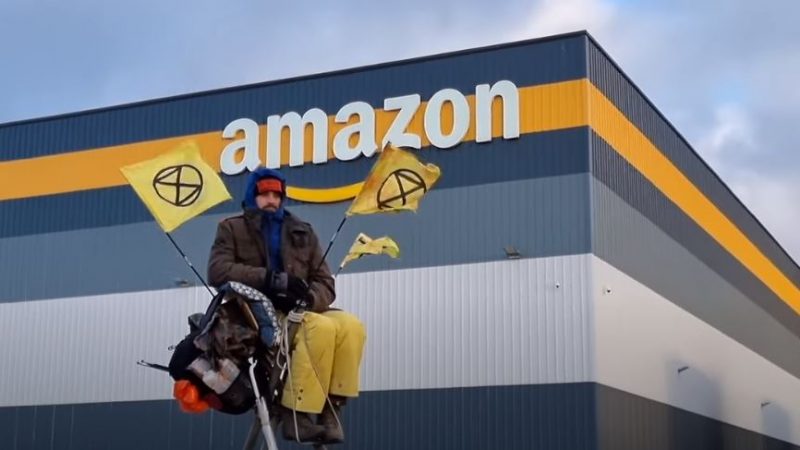 As Black Friday sales got underway, activists from Extinction Rebellion (XR) have spent the day blockading Amazon centres across the UK.

The protest action is in response the ecommerce giant’s treatment of employees and what the campaigners claim of Amazon’s “environmentally destructive and wasteful business practices.”

Armed with banners that read ‘Infinite growth: Finite planet’, since 5am today, XR activists have tied themselves together and utilised bamboo structures, in an attempt to disrupt Amazon’s distribution network on one of the busiest days on the consumer calendar.

Today’s action was not confined to the UK, as similar protests were carried out in Germany and the Netherlands.

The nationwide protests come just days after news broke that ambulances have been called to Amazon’s fulfilment centres’ almost 1,000 times since 2018. Earlier this month, a worker died at Amazon’s Tilbury site in Essex, its largest distribution centre in the UK.

Warehouse staff accused the online retailer as treating them like “slaves” or “robots”, with one employee telling the Mirror:

“Amazon don’t care about the health of their workers, they treat people like slaves.

“For the first three sick days you don’t get paid – it doesn’t matter if you’re dying or you’ve lost a leg.

“That policy encourages people to come to work when they are not well because they are scared of not being paid or being fired.

“Picking items is relentless, it’s physically so hard on your body and the productivity targets are stressful. It’s all about money.”

Refusal to engage with unions

Amazon has also been criticised for its refusal to recognise or engage with unions, unless it is forced.

Employees of the company, which, as of October 2021, had a net worth of $1.7 trillion, have also made calls for its chief executive, Jeff Bezos, to act on the climate crisis.

The CEO faced criticism for refusing to address workers’ calls for the company to overhaul its climate policy at a shareholder meeting in May 2019.

Members from Amazon Employees for Climate Justice attended the meeting, representing 7,700 Amazon staff who signed a letter publicly urging the company to overhaul its climate policy.

During the meeting, employees put forth a proposal requesting a public report on climate change from Amazon’s board of directors.

However, the board suggested shareholders vote against it, and it was not passed.

Two and half years later and the company remains under fire for its “environmentally destructive and wasteful business practices” and for its alleged poor treatment of staff.

At other Amazon sites in the UK, separate Black Friday protests by the Make Amazon Pay coalition of unions and campaign groups have taken place today.

The movement demands Amazon to amend its business model, including improving pay, ending employee surveillance, and increasing engagement with unions.

The protests were supported by many unions and campaign groups, including GMB Union, the Trades Union Congress, the International Transport Workers Federation and War on Want

“That includes our commitment to be net zero carbon by 2040, 10 years ahead of the Paris agreement, providing excellent pay and benefits in a safe and modern work environment, and supporting the tens of thousands of British small businesses who sell on our store,” they said.