"The queer community shouldn’t have to see our brothers’ and sisters’ faces, siblings’ faces, black and blue across social media." 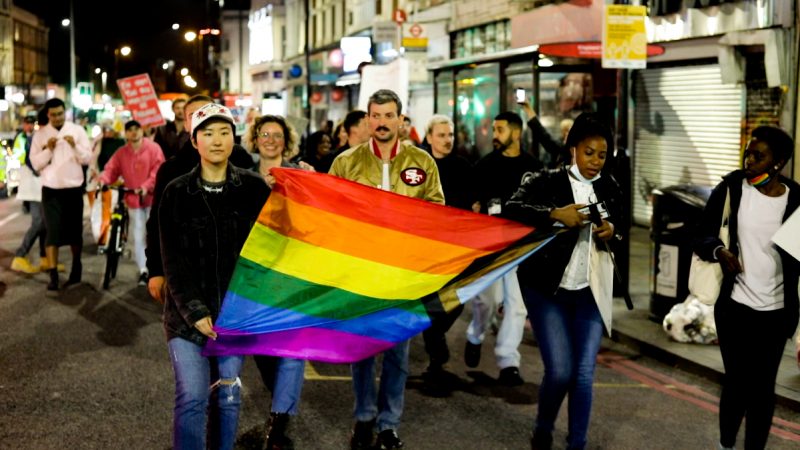 Sam Stroud is a social researcher and journalist from Cardiff.

Just over 50 years since the very first LGBT+ rights demonstration in the UK, the organisers of the ground-breaking act, the Gay Liberation Front (GLF), gathered for a protest in Hackney, London.

On Friday 27th August, across the road from the The Glory pub, around 100 defiant protestors, along with a corps of uncertain-looking police officers, thronged the street, before marching jubilantly up Kingsland Road. A day later, a similar procession took to the streets of Bristol.

The events were the second iteration of Queer Night Pride – featuring representatives from GLF and a range of LGBT+ liberation organisations – and their immediate stimulus was the recent wave of hate crimes against LGBT+ people.

While some things may have changed for the better since the first ever UK gay liberation protest took place on a November night in 1970, as we move further into the 21st century Britain is becoming an increasingly hostile place for LGBT+ people.

Earlier in August, Ranjith Kankanamalage was murdered in East London in what police believe was a homophobic attack. In Birmingham’s Gay Village, a married gay couple were viciously attacked. In June, Josh Ormrod was beaten up outside a bar in Liverpool after standing up to homophobic abuse.

Government statistics show that in 2019/2020, sexual orientation hate crimes rose by 19% in England and Wales, and reported LGBT+ hate crime has grown at double the rate of other forms of hate crime for the last two years.

In the face of this hostile environment, the speeches at Queer Night Pride had an edge of righteous anger, but the overriding message was one of defiance and solidarity.

The marchers carried swirling hand-made placards, music throbbed from portable speakers, disco lights sparkled in the darkness, and there was just as much dancing and hugging as there was chanting and clapping.

Naya Thorn was visiting from the North West. When Thorn decided to organise a recent solidarity protest in the Liverpool there had been 5 homophobic attacks in the city in the course of a single week.

Thorn said: “The queer community shouldn’t have to see our brothers’ and sisters’ faces, siblings’ faces, black and blue across social media. It’s not fair – it’s not what we should be dealing with.”

For Thorn, the purpose of Friday’s protest was not simply to demand change, but also to signal that a proud, defiant community exists and continues to flourish: in the face of, and undeterred by, attempts to intimidate them.

Thorn said: “It’s important to show there is a community. When you’re attacked you feel so vulnerable, so lonely. Communities are often destroyed by fear, so by showing that there is a community, and that it’s not broken by fear, it not only shows people who aren’t part of this community that we are visible, and we aren’t going to let it happen; it also shows people in our community that we are here for you, you don’t have to feel scared.”

Tyler Hatwell, who was at Queer Night Pride as the representative and founder of Traveller Pride, made a similar point, saying: “Hate crime doesn’t just affect an individual, but when you realise that somebody’s been attacked for something that’s an immutable characteristic that you happen to have, it frightens you, it makes you feel unsafe, and when there’s a rise in something like that you can often feel like you don’t belong, you ought to hide, you need to go to the sidelines – you need to blend in.’”

It is the pressing need to counteract this atomising psychological message with a solidaristic one, Hatwell argues, which makes events like Queer Night Pride so important.

Hatwell said: “Having a space which proves that’s not true, and actually owning the night, rather than feeling that you’re beholden to it, I think is really psychologically important.

“Seeing something as simple as a bunch of people getting together and owning it on a very on-the-streets way is integral.”

A sense of change

For many of the marchers, the very first LGBT+ protest is not simply an abstract historical event, but a collective memory radiant with relevance.

As Thorn argued: “Part of being part of this community is to look back at the people before us, look how far we’ve come, but also look forward to how far we have to come in the future.

“We have to look at their power, take it, and apply it to what we’re dealing with right now.”

And in Hatwell’s experience, reflecting on the connection between contemporary protests and those earlier acts of defiance helps to counteract the sense of futility and desperation that can accompany experiences of hate crimes.

He said: “It is integral to learn this history and for it to be a part of the conversation today, for us to get a sense of [change] – otherwise I think it can be very easy to become miserable, and to feel that nothing will change, and to get a bit despondent when you hear about these hate crimes.”

In his memoir Blowing the Lid, one of the attendees at the original GLF demonstration, Stuart Feather, writes that in the course of that night participants “shared our beliefs and convictions in public and acted them out in the world … Whatever barriers there were between us were let down that night. An emotional connection of solidarity and respect, for ourselves and each other was forged. It remains palpable to this day.”

For the demonstrators marching through Hackney last Friday night, those emotional connections were far more palpable than the hatred of bigots or the sneers of the powerful – and in the continuing battle for true liberation, bonds of solidarity and respect were being forged and re-forged once again.