Interrupted by chants of “Oh, Jeremy Corbyn”, Starmer attempted to present Labour as a serious alternative to the Tory government. 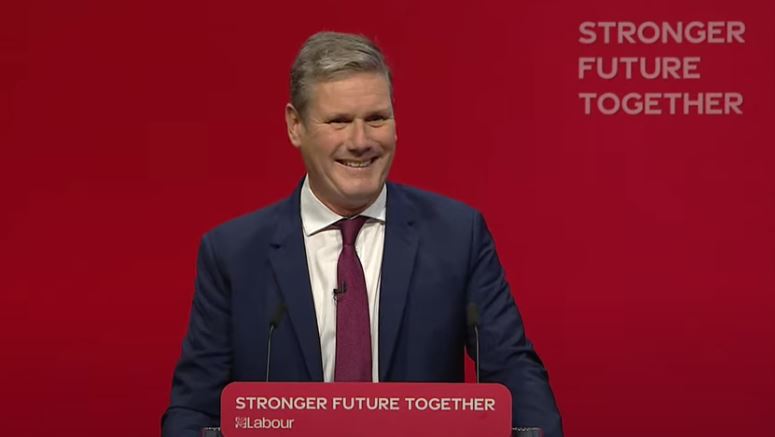 After a week of ups and downs, the Labour leader delivered a 90-minute speech on the last day of conference, which covered a broad range of topics.

Interrupted by chants of “Oh, Jeremy Corbyn”, Starmer attempted to present Labour as a serious alternative to the Tory government, making a series of promises and policies.

One such pledge is to shift NHS priority “from emergency care, towards prevention.” Describing mental health as one of the “urgent needs of our time”, the party leader said Labour would guarantee support will be available in “less than a month” and would recruit more professionals in mental health to ensure schools have specialist support and communities have open access to mental health hubs.

“Under Labour, spending on mental health will never be allowed to fall”, he said.

‘Most ambitious school improvement plan in a generation’

Starmer said that under a Labour government “education will recover”, as the party will launch the “most ambitious school improvement plan in a generation.” Two weeks of compulsory work experience would be reinstated, and Labour would guarantee that every young person will get to see a careers advisor. The school improvement plan would provide every child with the opportunity to play competitive sport and play an instrument, Starmer announced.

In relation to crime, Starmer said Labour would strengthen legal protections for the victims of crime.

On climate, the Labour leader spoke of the party’s Green New Deal and how it will include a climate investment pledge to fund the likes of making upgrades to making new homes zero carbon. He pledged to insulate every home in the next decade and to introduce a Clean Air Act and a “net zero” test for “everything we do in government.”

On the economy, Starmer said Labour would support small businesses and invest a minimum of 3% of GDP in science and research and development.

Reaction to the speech has been mixed. Some saw it has progress, a positive end to a week beset with unsavoury infighting and the shock resignation of shadow employment secretary, Andy McDonald.

Ben McGowan, a politics student, told the BBC the speech was “good” and saw it as progress on Starmer’s predecessor, Jeremy Corbyn.

“It was the first time we were able to see him and get a clear vision of what he was about,” he said.

“He was confident, and he just came up with things that sounded like we could win. It may not have been policy heavy, but it was a vision that I think will get through to the public.”

“Keir’s speech shows that Labour in power could bring hope to the many families forgotten by this government,” said McAnea.

“We’re clearly not there yet“

Not everyone was convinced by Starmer’s speech, which has come under fire for showing focus on winning rather than unity.

“If you’re a Unite member worried about the cost of living crisis, empty petrol pumps, abhorrent fire and rehire in our workplaces and the end of furlough just hours away, there wasn’t much in this speech.

“We needed to hear a Labour leader who is as angry as we are about the harm being done to our workers, and as determined as Unite to stand up against abusive employers.

“We’re clearly not there yet,” said MacGregor.

Andrew Scattergood, co-chair of Momentum said Starmer “identified a lot of problems but offered very few solutions” in his speech, adding: “We all know that the NHS crisis is bad – but what will our party do about it?”

Author and political correspondent Paul Walker said that for a very long speech it had little in terms of new announcement, and none which will make a headline.

“News reports will have to digest the main message: I’m serious, PM is not; we’re very different from Corbyn era; we’re serious about winning,” said Walker.

“The problem with Keir Starmer’s speech is a very simple one.

“The only thing his team passionately believe in is defining themselves against the left. They just don’t have positive alternative to the Tories or compelling vision for the country. This is a problem.”

Contrasting reaction to the leader’s speech affirms what has been felt during the last five days in Brighton – that the conference – much like the party itself – felt distinctively split into two very different tribes.