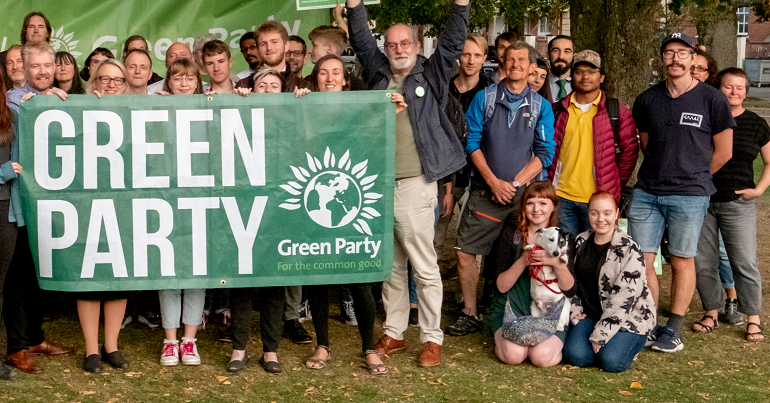 Nominations have now closed for the Green Party of England and Wales’ leadership election. There’s now a crowded field of five candidates for the top job.

Two late entrants to the race came in on August 17th – former deputy leader of the party Shahrar Ali, and Ashley Gunstock – an actor best known for his time in ITV police drama The Bill.

Ali isn’t new to leadership contests. He came second in the 2018 election, and third in 2020. Prior to this, Ali served one term as one of the party’s deputy leaders alongside Amelia Womack. Elected in 2014, he was unsuccessful in his bid to be re-elected two years later.

Ali has also served as a spokesperson for the party. He was previously the Greens’ home affairs spokesperson, before taking on the rebranded “policing and domestic safety” brief in 2021.

His appointment to the latter role has proved contentious. In July, the party’s youth wing – the Young Greens – passed a motion calling for the termination of his appointment. This followed Sian Berry’s decision not to stand in this year’s leadership election, citing what she sees as an “inconsistency” between the party’s position in favour of trans rights and the appointment of party spokespeople. Although Berry did not name him, it is widely understood that she was referring to Ali’s appointment.

Ali is not shying away from leaning into this controversy. In fact, he’s centreing it in his pitch for the leadership. In a tweet thread announcing his candidacy, two out of his three central points relate to the Greens’ policy on LGBTIQA+ rights. He has pledged to prioritise ‘debating culture’ in the party, and ‘welcoming women’ who oppose the Greens’ pro-trans policies back to the party.

In his announcement, Ali said, “Conflict evident in discussion of provision of services for transgender people & those who feel impacted by changes to services provided on same-sex lines, [especially] women. We must return to culture of open debate, where taking offence [is] not used to prevent those who do wish to debate.”

He continued, suggesting others in the party have acted as “bullies” engaging in “lies” and “intimidation”. Ali said, “Party unity will not come from wishfully brushing problems under the carpet, or sitting on the fence while bullies continue their lies and intimidation, but from tackling challenges head on – and having those difficult conversations.

“You need a leader not afraid to question, and to actively take a stand against, the abuse directed upon women – many of whom have been driven to resign from parties and others of whom are resisting from within.”

While these positions place Ali in clear contrast with the other leadership candidates, the third plank of Ali’s campaign is more in keeping with theirs. Stating “we are the last generation able to save the planet from ourselves”, Ali is also putting the climate crisis at the heart of his offer to members.

Ali said: “I’m standing through necessity. We are the last generation able to save the planet from ourselves. Despite decades of knowing that we were living unsustainably, we carry on trying to have our cake and eat it – with a return to post-Covid short-haul flights and overconsumption.”

Like Ali, Gunstock isn’t a newcomer to Green Party leadership contests. In 2008, he went head to head with Caroline Lucas in the party’s first ever leadership election. Despite Lucas’ much higher profile, he fared better than other contenders in later years, picking up 7.6 per cent of the vote.

Gunstock is yet to release much detail on his campaign. He made his announcement in a brief tweet:

Evening all! I just thought that I’d let you know that I’m now officially a candidate standing at the forthcoming election for Green Party Leader. All good wishes – Ashley

However, like other contenders in this year’s election, Gunstock has placed the climate crisis front and centre of his pitch to members. Following his announcement, he told Bright Green that he saw getting more Greens elected as key to tackling the climate crisis. He also said that he stands for “ecological, social, political and economic justice”.

He said: “My overriding desire is to address the issue of Climate Change and avert the otherwise impending catastrophe. I believe that, in order to do so, as a political party, it is the job of the Greens to keep the pressure on the other parties by getting more of us elected. I stand for ecological, social, political and economic justice – and I have a plan.”

These announcements follow other candidates coming forward in the last week. In the last seven days, Amelia Womack and Tamsin Omond, and Carla Denyer and Adrian Ramsay both announced they were standing for the top job on joint tickets. In July, Tina Rothery and Martin Hemingway put themselves forward for the role too – also standing to be co-leaders.

The Greens’ leadership election is taking place outside of the normal cycle. It has been triggered by Jonathan Bartley’s resignation at the end of July. His co-leader, Sian Berry, has continued as caretaker leader but ruled out standing in the by-election.

Members will vote between August 31 and September 21.