Most normal people can’t afford to hire legislators or lobbyists 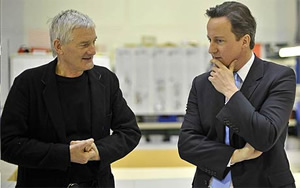 Former US President Abraham Lincoln is often accredited with saying: “I see in the near future a crisis approaching that unnerves me and causes me to tremble for the safety of my country.

“Corporations have been enthroned and an era of corruption in high places will follow, and the money power of the country will endeavour to prolong its reign by working upon the prejudices of the people until all wealth is aggregated in a few hands and the Republic is destroyed.”

Some may not agree with Lincoln’s apocalyptic views, but there is no denying the power of corporations and its colonisation of the institutions of government.

This week, we learnt that billionaire Sir James Dyson texted the UK Prime Minister Boris Johnson to demand tax concessions for his staff and business before manufacturing ventilators for Covid-19 patients. Johnson responded “I will fix it”.

Two weeks later, the government complied and announced tax concessions for selected foreign workers arriving during the pandemic. There was no public statement about the text messages. Dyson’s competitors could not demand tax concessions conducive to their business model.

Just last week, it became known that former Prime Minister David Cameron, subsequently an employee of Greensill Capital, texted the Chancellor to demand changes to the financial support scheme created to help businesses. Again, there was no transparency.

Due to income and wealth inequalities, only big corporations and the rich are able to make political donations, give jobs to former ministers, shower consultancies on legislators and hire lobbyists to advance their interests. They get access to upper echelons of power and shape government policies.

Those excluded are faced with the choice of either being left behind or joining the escalating arms race for influence.

Most normal people can’t afford to hire legislators or lobbyists. They don’t have the phone number of the Prime Minister, the Chancellor or other Ministers to share their lived experience of poverty, inequality, crumbling infrastructure, queues for healthcare and social exclusion.

The inevitable result is that government policies are skewed towards big business – though some crumbs are occasionally thrown to normal people.

Corporations may not vote but their interests are writ-large in legislative processes. Big business seconds advisers to government departments, frames the terms of legislation and disciplines governments with threats of economic chaos by relocating to other countries. Corporate elites sit on bodies adjudicating mergers and takeovers. They decide whether something counts as tax abuse and much more. Ministers protect corporations from prosecutions for criminal conduct.

There is the saga of the unresolved banking frauds at RBS and HBOS. The Financial Conduct Authority failed to deal with the culprits and was severely criticised by parliamentary committees.

The Thames Valley Police and Crime Commissioner stepped in to prosecute six financiers, including a senior ex-HBOS banker. They were convicted of fraud and given 47-and-half-years prison sentence.

This week, I informed the House of Lords that after being passed from pillar to post, the Commissioner sought a meeting with the Prime Minister.

On 30 May 2017, he wrote to the then Prime Minister Theresa May and said: “There is a serious problem with bank governance, which appears to be corrupt at the highest level in a number of our major banks.

“The governance system itself is being run by those most involved in cover ups and corrupt practices.

The letter added: “Some of the cover up also involves the Treasury and two past Chancellors”.

On 12 June 2017, Cabinet Secretary Sir Jeremy Heywood replied on behalf of the Prime Minister and said: “I was very concerned to read the extremely serious allegations set out in your letter.

“Given the extremely serious nature of your allegations, I will keep a close eye on this matter, and would be happy to meet you.”

The Commissioner wanted to meet Sir Jeremy, and said so on 19 June, but did not hear anything further from him.

Eventually, Sir Jeremy replied in August 2017 saying: “I will be unable to meet with you to discuss these matters.”

So there you have it. Ministers obey instructions from corporate grandees and lobbyists, but ignore the pleas of law enforcement officers.

Considerable attention is rightly focused on the Cameron and Dyson interventions, but the bigger issue is corporate power and its subversion of possibilities of democracy.

We have a choice. We can either have democracy and public accountability or rampant corporate power with enormous private wealth and power concentrated in the hands of a few business executives – but not both.