Another Europe is Possible has launched ‘Fight for The Future’ ahead of an extreme Brexit later this year. 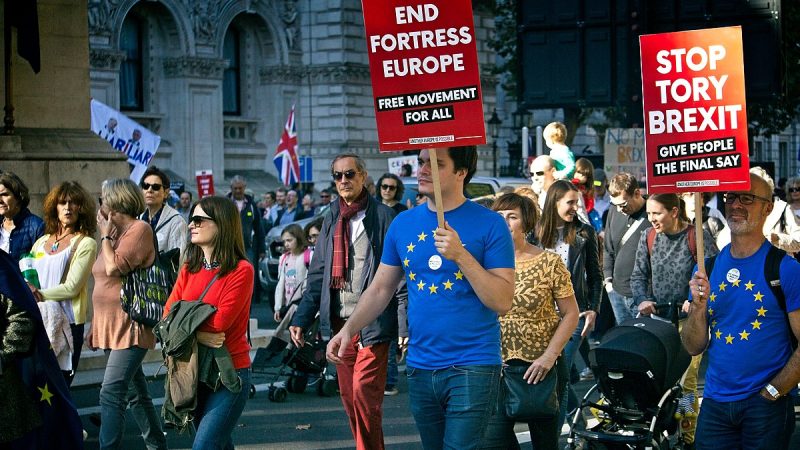 Campaigners hope to “wake up” the left and the remains of the anti-Brexit movement to the dangers posed by the Tories’ plans for Britain after Brexit.

Another Europe is Possible – the group that led the campaign against Brexit on the left – has this week launched a major new campaign aimed at taking on the government’s agenda for post-Brexit Britain.

Fight for The Future will begin with a series of online events in early October, with speakers including John McDonnell, Nadia Whittome, Clive Lewis, and trade union leaders. Activists will then be called on for ‘street activity and socially-distanced protests’ around the US trade deal and the urgent problem of migrants’ rights in the wake of Brexit.

“We are under attack”, the group’s website says.  “This is the biggest attempt to deregulate the economy in British history, alongside a vicious anti-migrant policy. Boris Johnson and his allies were always clear that this is what they wanted from Brexit. Now, it is happening.”

Campaigners say they want to “raise the alarm” about the dangers of the Tories’ post-Brexit programme, listing them as: “In the coming months”, the campaign says, “the government is going to try to attack and deport migrants, including EU citizens who have made their homes here; slash workers’ rights; sign a US trade deal which opens up the NHS to privatisation; ditch many of our environmental standards;deregulate our food quality and consumer rights; and abolish some of our human rights”.

The new campaign follows the launch of The Alternative Mandate over the summer, which saw a range of groups and politicians come together to endorse a raft of demands on the Brexit process.

Left-wing labour MP Nadia Whittome said: “Boris Johnson has always been clear about what a Tory Brexit would mean – a race to the bottom and attacks on the rights of migrants. The government has a majority in parliament, but real power always comes from below. Covid means that we must be careful about safety when we mobilise, but we must now build a movement that is capable of providing serious opposition to what the Tories want to do.

“We are talking about the biggest attempt to deregulate the economy in British history. We need to defeat what we can, and keep an alternative vision alive.”

Michael Chessum, national organiser for Another Europe, warned that the Tories hoped to ‘drive through unprecedented changes to our economy and society’: “With coronavirus dominating the headlines, Johnson is pressing ahead with US trade negotiations and has already announced plans to scrap social and environmental protections,” he said.

“There is huge public opposition to economic deregulation and the lowering of food standards, but unless we build a big, loud opposition to what the Tories are planning, it could all happen very quickly. The left and the remains of the anti Brexit movement need to wake up,” he added.

Alena Ivanova, an organiser for the Right to Stay campaign and Another Europe, said it was crucial the left stands up for EU citizens’ rights: “As it stands, EU citizens without Settled Status will lose their legal right to be in the UK from June 2021 – and even with a 99% success rate, that would still mean tens of thousands of people who have made Britain their home being liable for deportation.”

“Already, many migrants have been given only a partial pre-Settled status, and some have been rejected outright. This is an emergency, and we can’t just rely on asking politicians nicely. We need to raise the alarm about this time bomb, build public pressure and fight for an unconditional right to stay for everyone,” she said.

October will also see ‘Covid safe’ coordinated protests take place against the ‘continuing mishandling’ of the Covid crisis by the Conservatives. The protests are being organised by the People’s Assembly Against Austerity.