The UK was slow to start testing large numbers. 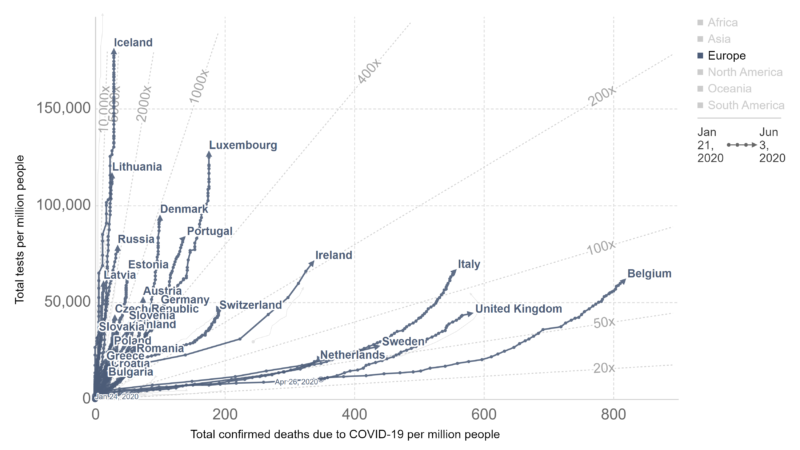 The government which was so against international comparisons when the UK’s death rate became the highest in Europe is now fond of saying the UK is testing more than any other nation in Europe.

But much of the reason the UK is only testing more than other countries now is because it was so slow to test before. So there is a backlog of people who need tests and are only now being tested.

It’s like a last-minute student claiming they were the hardest-working in their class at 3am the night before their deadline. Technically it’s true but, through lack of context, it completely misses the point.

It is also misleading because it doesn’t take account of the UK’s comparatively large population and high infection rate. These mean that the UK should be testing more than the rest of Europe.

Here is the graph that makes the point the government are so keen to make. It shows the UK’s total number of tests per day is up there with the best in Europe.

But there’s many problems with this data. First, it doesn’t include Germany, France and Spain as they don’t report daily testing numbers. Other data shows Germany tested more than the UK, Spain tested large numbers faster while France’s data is too patchy to judge.

Second, the UK (which is has been slow to get its testing regime up and running) didn’t supply data until the end of April.

Third, it doesn’t factor in how big a country’s population is and how bad their coronavirus situation is.

The UK’s population is bigger thany any on this chart and coronavirus has been worse here than in any other European country – with the possible exception of Spain.

If you look at the number of tests per capita then the UK was one of the worst for most of April. When the virus was at its peak, we were barely testing.

Since the start of May, testing has increased but we are still is firmly mid-table overall. We are the blue line next to Czech Republic.

And we should have bentesting more per-capita than anywhere else in Europe because our death and infection rates have been, and remain, up there with the very worst in Europe.

The chart below shows the UK government let the deaths mount up before it started increasing the numer of tests it did. Only Belgium was worse in this respect.

According to Joe Hassell, a World In Data researcher: “The UK got an early headstart on testing: hundreds of people were tested for every early case. Comprehensive contact tracing was in placed early on. But by early March we are beginning to see signs that testing in the UK isn’t able to keep up with the outbreak…daily confirmed cases begin to rise, but testing stagnates.”

That stagnation continued throughout March and April. And, as the chart below shows, we continue to do less tests per new coronavirus case than anywhere in Europe but Sweden.