Gold is wreaking havoc with our export statistics. 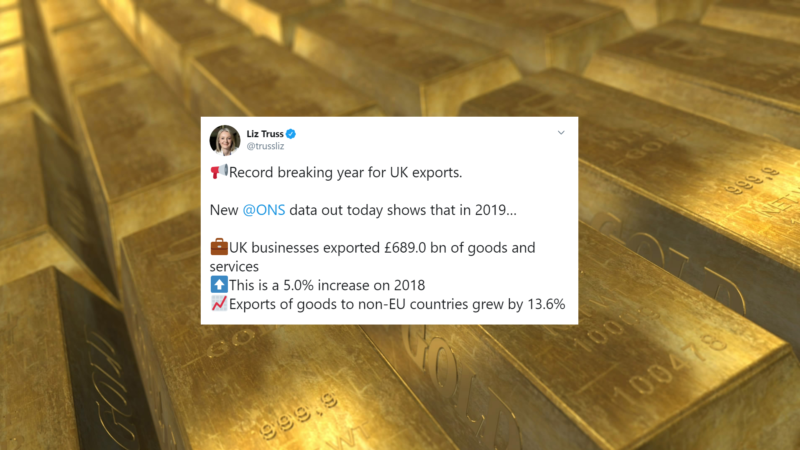 The government press machine went into overdrive last week as new export figures were released: “The UK is an exporting superpower and these new statistics show that UK companies are exporting record levels of goods and services,” said International Trade Secretary Liz Truss.

Dig beneath the headline figures though – a 5% increase in exports of goods and services last year compared to 2018 – and it turns out the rosy picture does not quite reflect the reality.

Firstly, nearly every year on record has been a ‘record breaking’ year for UK exports. After all, short of a major crash, the UK economy tends to grow year on year:

In a series of tweets, Sky News’ Economics Editor Ed Conway further revealed just how misleading No 10’s spin on the exports figures really is.

“For the vast majority of history [exports of gold from the UK] were near zero (average monthly level apt £126m). Then, suddenly, in the last two months of last year, gold exports were catapulted higher,” Conway tweeted.

An unexplained two month gold export spike in November and December was roughly equivalent to the GDP of Jamaica:

The Office for National Statistics are bound by international rules to include gold in the headline numbers. However, that massively distorts them, says Conway: the UK is a world hub for gold trading, so ‘any movement/change of ownership of gold bars counts as imports/exports, even though it’s hardly what anyone would consider an “export”‘.

In other words, a company moving changing the official holding location of the gold they hold from Britain to another country counts as an ‘export’…even if the gold stays in exactly the same UK vaults. (That could happen if a company allocates a portion of its UK gold to a US buyer, for example.)

The ONS does try and be transparent about the distorting nature of gold on UK exports – publishing figures that strip them out – but don’t expect Tory politicians to let that get in the way of a press release:

The likely reason appears to be that A US bank with London gold vaults shifted some of its gold from being ‘unallocated’ to being ‘allocated’: “The gold stayed in the same vault but technically it shifted from UK ownership to US. In other words, a couple of clicks in a bank’s spreadsheet caused the biggest fluctuation in Britain’s trade figures in modern history. At least that’s the most plausible explanation,” Conway said.

“[This] was little more than a notional change of ownership of gold that sat on the same shelf before and after its supposed ‘export’ took place – [and] does seem to have had a material impact on the UK’s trade statistics. This is absurd,” Richard Murphy, Professor of Practice in International Political Economy, at City University told Left Foot Forward.

“What actually happened was a notional change of ownership of an asset that has no impact on the UK’s well being. What is more, it reflected nothing that was really made. The sale of this gold certainly added no value.

“What is needed then is a system that ensures that if such anomalies arise they can be identified, noted and removed from the reported trade data as what are called in accounting terms ‘exceptional items’. We expect commercial accounting to do this. It’s entirely reasonable to think the government might do the same, albeit that it should also report that it has happened to prevent abuse taking place.

“We deserve national income accounting that really reflects what happens in our economy. It seems that we are not getting it,” Prof Murphy told LFF.