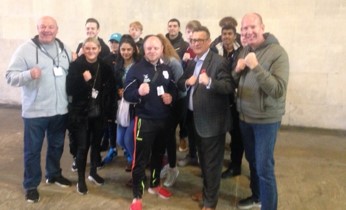 Why did a local Labour Party in south-west London organise for a boxing club in Hull to visit their local boxing club? Because it’s socialism in action, as organisers Martin Ellis and Conor Bollins explain.

Labour’s route back to power must involve radically reconnecting with communities at a grassroots level and helping to heal the rifts in British society.

The 2019 General Election may have put to rest the constitutional crisis caused by Brexit, but the country’s economic, social and cultural divisions will not dissipate once the UK leaves the EU.

We have put forward a proposal to encourage local authorities from different parts of the country to invest in cultural exchanges that open people up to new experiences and break down national prejudices.

The initiative, which has been named Project Athelstan, was trialled in October 2019 during the immediate run-up to the General Election.

We believe that, particularly since the Thatcher years, neoliberalism has caused society to be put second to the individual and that this has gone against our nature as social beings.

Increased levels of mental health issues can be attributed to the cold, atomistic times in which we live. Political insight in how to redress this catastrophe can be gleaned from the NHS’s 5 steps to mental wellbeing. These are: 1) Connect, 2) Be Active, 3) Keep Learning, 4) Give to others and 5) Be Mindful. Project Athelstan puts these values into practice.

This can be explained with reference to the trial that our CLP was involved with advertising and fundraising for.

Children and young adults from East Hull Boxing Academy travelled down to Surbiton where they participated in a range of social and cultural activities.

The two clubs trained together, learnt about each other’s communities and developed friendships. The itinerary struck a balance between sport, socialising and education.

The trip culminated in a short train ride from Surbiton to Westminster and a guided tour of Parliament that was introduced by Karl Turner, Labour MP for Kingston upon Hull East.

Participants in the trial were asked to fill out feedback forms. The evidence suggests that both children and adults found the exchange hugely rewarding.

The cultural, physical and social aspects of the programme were all praised. One young boxer described learning “that it is very important to experience how others live in very different environments to your own, and this can help us in all aspects of everyday life.”

The trip also allowed the coaches at East Hull Boxing Academy to get to know their MP a bit better. Another measure of the trial’s success is the fact that the two boxing clubs are now looking into inviting Surbiton Boxers to Hull, thus completing the exchange.

Kingston & Surbiton CLP has members with a personal connection to boxing and we are glad this facilitated Project Athelstan’s first trial.

Boxing can be hugely beneficial for mental wellbeing as it teaches self-respect, redirects anxiety and allows endorphins to be released during exercise.

However, town twinning could link people together through all types of sports and the arts. Drama groups, football teams and music bands could all benefit from the collaboration of different local authorities.

For instance, councils working together could generate more investment opportunities. More importantly, such collaboration could connect communities in a profoundly social way.

It seemed fitting to name the Project after Athelstan, as he was the first monarch to unite England as one kingdom and was crowned at the spot marked by the Coronation Stone in Kingston-upon-Thames.

As a result of the exchange, these two parts of the country now share more than just a namesake. They are united by the bonds of solidarity that these clubs developed, spanning North and South.

We feel that it say a lot about our local Labour Party that we were hands-on with organising a community event related to a traditionally working-class sport at a time when the Tory, Lib Dem and Brexit Party leaders were all posing for photo stunt opportunities in the ring, without having any real connection to boxing.

Labour must do better at highlighting such work if we are to showcase the authenticity and values of our wider membership.

As we reflect on Labour’s decline of support in its heartlands, it is also worth asking how the movement can re-engage with British culture and history in concrete terms.

Karl Turner described Project Athelstan as ‘Socialism in Action’. We are delighted with this description and the success of the trial.

The CLP now hopes to submit his town-twinning initiative to Labour’s National Policy forum with the support of as many local Labour branches as possible.

Martin Ellis is the founder and director of Project Athelstan. He was a motor mechanic in Surbiton for 25 years, before completing a degree in Sociology with Literature and re-training as a civil servant. His combined experience led to him generating his town-twinning proposals. When he retired in 2018, he was free to take forward his ideas as a member of the Labour Party. Martin has had a lifelong interest in boxing and currently coaches at Surbiton Boxing Club.

Conor Bollins is Chair for Kingston & Surbiton Labour and is close to submitting a PhD in the History of Political Thought. He has helped with the conceptual development of Project Athelstan and assisted with fundraising for its first trial. Conor’s father had him take boxing classes on Kingston’s Cambridge Road Estate when he was a teenager, but he was always more a thinker than a fighter.

You can find out more about Project Athelstan or even get involved by contacting Kingston & Surbiton Labour. Email [email protected]