Seats where Tories hope to win or where Labour or the Lib Dems are challenging them. Has the tactical voting advice worked? 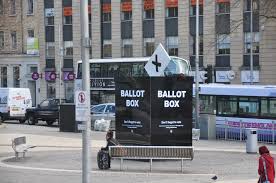 Discussion of tactical voting has been a key feature of the discussion around this election. Voting advice on how to deny the Tories a majority has been rife (if not always uniform). Based on analysis from expert Cristabel Cooper, here I outline five seats that may act as indicators as to how successful this has been.

Workington is a traditional Labour seat that hasn’t been blue since the 1979 general election. However, the Tories made a big noise about “Workington man” as their target this election. Sue Hayman won last time with an increased vote share but reduced majority. The seat voted 61% to leave which may be why the Tories saw it as being totemic as part of their strategy to break the ‘red wall’. In the first Yougov MRP it was shown as being a potential Tory gain – though has swung back to leans Labour in that released this week. If Labour hold this seat, they may be holding back the Tory tide. Result expected approx. 1 am.

Putney, on the other hand, has been a Tory seat since Labour lost it in 2005. Arguably it was an unlikely Labour seat even then – part of the 1997 wave of unexpected gains for the party. However, it voted overwhelmingly to remain by 72%. Formerly represented by former Tory rebel Justine Greening, YouGov have this seat as leans Labour. Result expected approx. 2 am

Esher and Walton has a Tory majority of 23,293. That’s not a typo. That it is even in this list at all is extraordinary. That YouGov has it as a tossup between Tory Dominic Raab and his Lib Dem rival even more so. But Raab is an arch Brexiteer in a seat that voted 58% remain. He’s also the bloke who didn’t know about the importance of the Dover Calais crossing. Tactical voting could make this very tight. Result expected approx. 3 am

Cities of London and Westminster has never had a non-Tory MP. However, that belies the closeness of the 2017 result where Labour got within 3,148 votes of taking the seat. However, tactical voting sites are recommending a vote for former Labour MP and current Lib Dem Chuka Umunna. This may be hard for more tribal Labour members to swallow, but he has the better chance according to Yougov. In a seat that voted 72% remain, Umunna may be a good fit for the less tribal voters. Result expected approx. 3 am.

Canterbury was won by Labour for the first time in its existence in 2017 by fewer than 200 votes. However, it is – overall – a remain area – having voted 55% to stay in the EU. Local Labour MP Rosie Duffield is popular and the original Lib Dem candidate Tim Walker stood down in her favour and has supported her to win. If she is returned with an increased margin this shows that this kind of politics can work – whatever has happened elsewhere. Result expected approx 4 am.

It is perfectly possible that these seats could all behave as the preference of progressives suggests and we still wake up tomorrow with a Tory majority. This election has often felt like a seat by seat fight and one that may challenge our traditional sense of political geography. But these should give us a flavour of if the Remain/Progressive alliance has had a real impact.