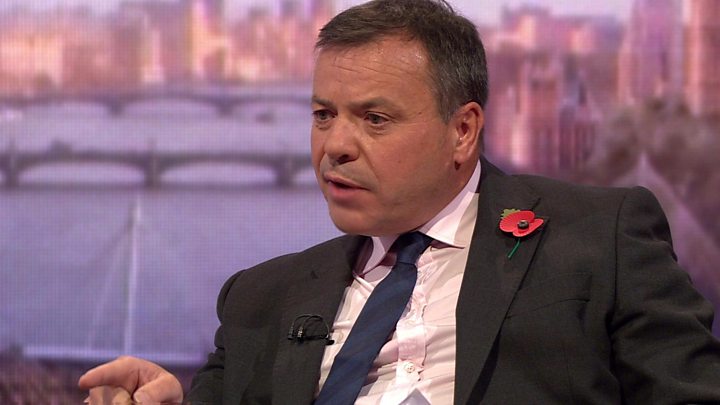 Whistleblower Dan Dennemarck, UKIP’s former data controller, has claimed he was ordered to hand over the party’s database of more than 100,000 current and ex-members to staff of Leave.EU founder Arron Banks during the EU referendum.

Leave.EU’s soon became one of the most powerful groups in British politics, widely credited with helping win the 2016 referendum vote for the Brexit campaign.

After the EU referendum, it continued to rally its supporters, urging them to deselect Remain-supporting Conservative MPs in an online campaign. Analysis from Channel 4 News found 20 out of the 29 MPs targeted have since left the party, or Parliament altogether.

Both Mr Banks and UKIP deny any wrongdoing and say data was not shared between the groups.

But on Channel 4 on Tuesday, David Soutter, former UKIP head of candidates, claimed a deal was made as UKIP faced financial meltdown following its unsuccessful election battle against the Conservatives in 2015.

He said: “It became very clear to me that UKIP was financially on the ropes. It was short of money. I understood at the time that an offer had been made by Arron Banks to take on that weight, to take on that role, and run the database. Run the membership function of UKIP”.

Dan Dennemarck, UKIP’s data controller in 2015 and 2016, said he was instructed to travel to Bristol to set up a new UKIP call centre, that was allegedly staffed and managed by employees of Mr Banks’ company, Rock Services.

As part of the project, he claims he was ordered to give Mr Banks’ staff access to UKIP’s membership list.

Mr Dennemarck said: “It didn’t sit right with me at the time, and the least I can do is be honest about the fact that I was involved in handling that data, and I was asked to hand it out. And I didn’t want to do this, but I did.”

Mr Dennemarck is writing to the Information Commissioner’s Office asking them to investigate the claims.

Data protection laws state that organisations must protect people’s personal data, and must have their consent to share it with other parties. Without consent, sharing could be unlawful.

Channel 4 News obtained evidence which they say suggests the data was mis-used. In his interview, Mr Dennemarck claimed UKIP members began complaining that they were being contacted by staff drumming-up support for Bank’s newly-launched organisation, Leave.EU.

He said: “The people who answered the phone at head office more than once approached me and said, ‘I just had a member call up and they said that Leave.EU has made contact with me. How do they know my contact details?’”

A former UKIP member told Channel 4 News he received repeated calls. He said: “They kept phoning and kept asking me to join. It became very persistent, it was getting towards once a day. I started then to request that they stop phoning and take my details off their database.

Channel 4 News has also obtained an email exchange in which Mr Banks appears to direct Leave.EU workers to send a message to the UKIP membership.

The Leave.EU message urged UKIP members not to back Paul Nuttall for the party’s leadership. In the email on 1 November 2016, Mr Banks writes: “This needs to be sent to all UKIP emails & the UKIP members you identified on the main database… Please get it out at 5pm and send me a copy. Not to go to leave.eu database only UKIP – identified.”

Later that day, Mr Banks’ right-hand man Andy Wigmore sent an email to a journalist attaching a draft of the message to UKIP supporters, stating Leave.EU would email it to “the entire UKIP database”. Banks’ representatives say some of the leaked emails were fabricated.

A statement (published in full below) released on behalf of Arron Banks denies data protection laws were breached. UKIP also denies that any laws were breached, and say no data was shared with Leave.EU, and there is no evidence that Banks or Leave.EU misappropriated the UKIP database.

The party’s lawyer, Adam Richardson, said the party had investigated if UKIP data had been mis-used but found that any contact from Leave.EU to UKIP members was “coincidental overlap”.

The Liberal Democrats also reportedly sold a huge database of supporters to the Remain campaign during the referendum.

A statement on behalf of Arron Banks said:

“The allegations that Channel 4 are making are false and part of a “politically motivated attack in Election week. Arron Banks via Rock Services made a donation to UKIP in the form of  services which included the creation of a UKIP “call centre” to handle membership services, this was reported to the Electoral commission.”

“Nigel Farage and [former UKIP Chairman] Steve Crowther and 24 MEP’s visited the site to open it.

These services were provided in separate offices to that of any other business associated with Arron Banks, and UKIP themselves provided the computer hardware used for membership activities.

“No IT platform or data was shared. The staff were employed by Rock Services, not Eldon Insurance, on a temporary basis.

“The membership data was provided by UKIP, to the UKIP team, a team of people employed to carry out membership tasks only for UKIP. The data was on UKIP’s database and was not in a format that could be downloaded or shared.

“All correspondence with UKIP members in the form of email, letters or phone had the direct authorization of Steve Crowther.

“Channel 4 have cited emails that were obtained from an illegal hack of computers systems & Twitter, and we are aware that fabricated emails have been inserted into these illegal downloads.

“There is a current police investigation into the three hacks including twitter and we have been asked not to make any comment to the media.”