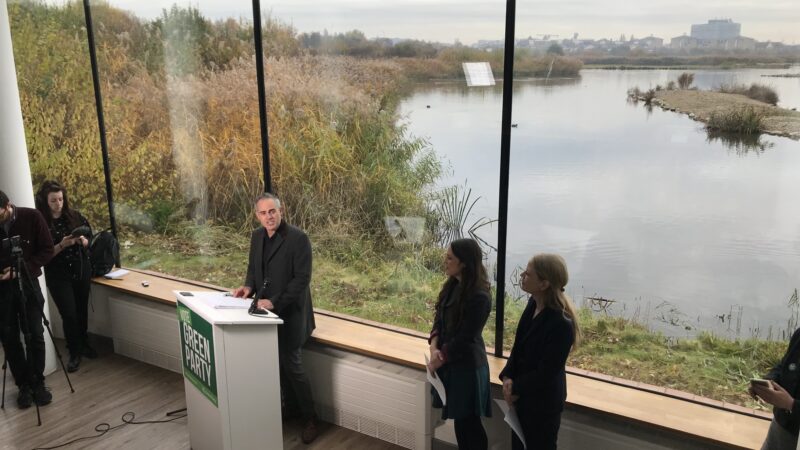 The Green Party launched their manifesto today at the London Wetland Centre in Barnes – a smart choice as it gave the broadcast media a backdrop of reeds and birds – within easy reach of central London’s media offices.

Here’s 7 thoughts about the manifesto launch:

1. It didn’t really focus on the manifesto

Instead of the 92-page manifesto, the party sent the press a list of ten bills it will introduce in the next parliament. The leaders’ speeches also focused on these bills more than the manifesto.

This tells their voters what the party will prioritise and what they will do with their one (or at best a handful of) MP(s) – rather than what they’d do if they won an impossible majority.

This realistic approach contrasts with Lib Dem leader Jo Swinson’s claim that she is a potential prime minister.

2. The Green advertise themselves as the strongest Remain party but their policy is no more Remain than Labour’s

Deputy leader Amelia Womack claimed “a vote for the Green Party this December is the strongest vote that you can have to keep Britain in Europe”.

This doesn’t seem true. The Liberal Democrats position is the strongest Remain one – to revoke article 50 so the UK would stay in the EU without going through another referendum.

The Green policy is basically the same as Labour’s – to have a second referendum of Remain vs Leave.

The difference between the Greens and Labour is that Labour would renegotiate the Brexit deal and put that up against Remain.

On the other hand, the Greens would put Boris Johnson’s Brexit deal up against Remain.

The Greens rightly argue that their leadership has been more enthusiasticly pro-Remain over the last few years and beyond and adopted a second referendum policy a lot earlier than Labour did.

Also, the Green leadership will definitely campaign for Remain – which Corbyn has not yet said he will do.

However, like Labour, the Green party is not uniformly Remain-leaning. One of its three parliamentarians, Baroness Jenny Jones, voted Leave.

While the Labour and Green policies are less Remain-y than the Liberal Democrats though, they are a lot more democratic.

Womack implied this in her speech when she said: “We’re not just going to overturn the votes of millions of our fellow citizens”.

3. There was hardly any negative campaigning

Berry, Bartley and Womack’s speeches focussed on the Greens – their history and their policies.

The Lib Dems, Labour and Tories were only briefly criticised while Johnson, Corbyn and Swinson weren’t personally attacked at all.

4. The need for a just transition was mentioned

Environmentalists who want to tackle the climate crisis on the backs of ordinary people lay themselves open to a backlash.

So it was good to see Bartley say that a Green New Deal would focus on social justice and Amelia Womack mention heating in the Global South alongside environmental catastrophes in Yorkshire, Venice and California.

5. None of the party’s candidates were particularly hyped-up

Womack mentioned Bristol West and the Isle of Wight as two seats the party could win – helped by the Liberal Democrats standing aside.

However, neither of the candidates spoke at the launch or was featured particularly prominently.

Because of First Past the Post, which Womack rightly called “disgustingly unfair”, the party is only likely to return one MP – Caroline Lucas again.

A Green Party spokesperson disputed this prediction however, telling Left Foot Foward that, despite the 2017 results, Bristol West and Isle of Wight are both “seriously winnable”.

The spokesperson said the party is focusing its resources there and “knows from the ground and other sources of information that a seismic shift has taken places, especially among young people and Remain supporters”.

The spokesperson added that the Unite to Remain agreement has impressed Remainers who wouldn’t have voted Green or Lib Dem independently.

6. The party still seems to have a diversity problem

While the party has for a long time been ahead of the game in terms of female leadership, the demographics of the members and candidates at the launch suggests it remains an overwhelmingly white party.

A party spokesperson told Left Foot Forward it doesn’t currently have the equality and diversity statistics for its candidates – but that the party created a fund to help Greens of Colour become candidates.

The Green MP was conspicuous by her absence – with a party spokesperson just saying that she couldn’t make it.

Despite not being the party’s leader for most of the last decade, she is by far its most high-profile figure.

Perhaps she wanted to let the co-leaders Sian Berry and Jonathan Bartley and deputy leader Amelia Womack have the limelight or perphaps she was busy campaigning elsewhere.