What the left can learn from Greta Thunberg - and Trump. 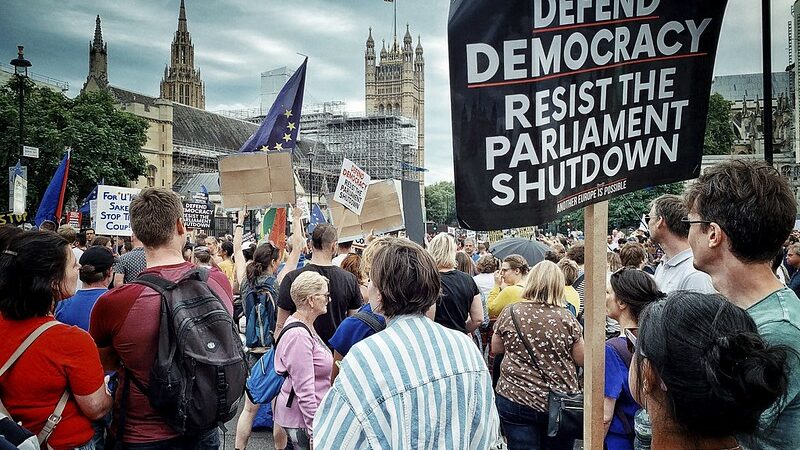 You spot a burglar in your house and shout ‘get out’. The burglar responds: ‘Where are your manners?’

Civility is contextual and relative. To be ‘civil’ in the face of malicious acts is inappropriate.

In September we saw this in practice. The Tories illegally close Parliament to subvert democratic debate. The left respond with justifiable anger. At this point and – significantly – once the deed is done, the Tories deflect by calling on everybody to calm down and remain civil.

For example, see the response of Conservative MP, Adam Afriyie, to MPs remaining in the Parliamentary chamber following the shutdown, on Twitter: “Tonight we’ve seen the sort of chaos & disgraceful behaviour that Corbyn, SNP & LibDems want for our great nation. They don’t respect parliament, democracy or the people’s vote of 2016. Only Conservatives will leave the EU & restore our sense of national pride.”

If the trap is successfully laid then it has three outcomes; firstly, it intimidates the left into toning down their response, secondly, it changes at least part of the media conversation to focus on the left’s behaviour, and thirdly, as a result of the first two outcomes, the initial extreme action is normalised.

In our current political context, the idea ‘returning’ to some halcyon time of civil debate is being used to obfuscate, and ultimately facilitate deeply immoral and socially damaging acts.

Although politicians and public figures on the left should not be reduced to constant outrage, we need more than polite disagreement.

An example of the absurd reach of this notion occurred when American immigration officials separated children from vulnerable families on the Sothern border. The children were put in cages and cells without even basic provisions. In an unforgivable act of cowardice and cruelty, the government sent a lawyer to argue that the children have no right to soap or toothpaste. This was permissible because it was ‘political’ and any objection is framed as a ‘difference of opinion’.

Yet when the politicians who endorsed this policy had constituents raise their voices in public or refuse them service in their restaurants, this was deemed as uncivil. Those raised voices led the American media, collectively, to investigate a supposed ‘lack of civility’ in politics. The writer Laurie Penny is correct when she writes, ‘In times like these, a demand for civility is a demand for complicity’.

Here in the UK, the scale of the current political catastrophe has to be communicated. The Prime Minister, elected by only Conservative party members, broke the law and boasts about his plans to do so again. The creeping normalisation of this behaviour can only be defeated by reactions that signal, with acute potency, that this is not normal.

When politicians stand in parliament or appear on television, they often disagree with each other. Our entire format of political speech is structured around debate. But this is what they must do. They have to fight (with the obvious caveat that they must avoid encouraging violence or abuse).

Perhaps the best examples come from those we seek to defeat. The reason Johnson and Trump’s behaviour is so monstrous is because of the content of their language and the action of their policies. But it appears that the very act of moving beyond the normal expectation of civility that has made them effective.

And so, being as the left actually is anti-elite, and really do support the needs of the people, it should be comfortable in a genuine populism.

We might also look to someone a little more inspiring. Greta Thunberg, who spoke clearly and emotionally, and who, crucially,  refused the polite platitudes of the political class –she understood the urgency of the situation and how to express it.

Civility is the trap the left must now escape. This means being angry in response to a cruel, irresponsible government, it means taking urgent action when there is an emergency, it means calling lies lies, and it means emerging from the comfortable spaces and appealing to the country with all the genuine gravity of this grave moment.

David Moorhead is a freelance writer and tweets at @RealityProtocol, the title of his upcoming book.

7 Responses to “The Civility Trap: Why it’s time the left got angry”