The G7's repressive roadshow came to Biarritz and locals didn't like it. 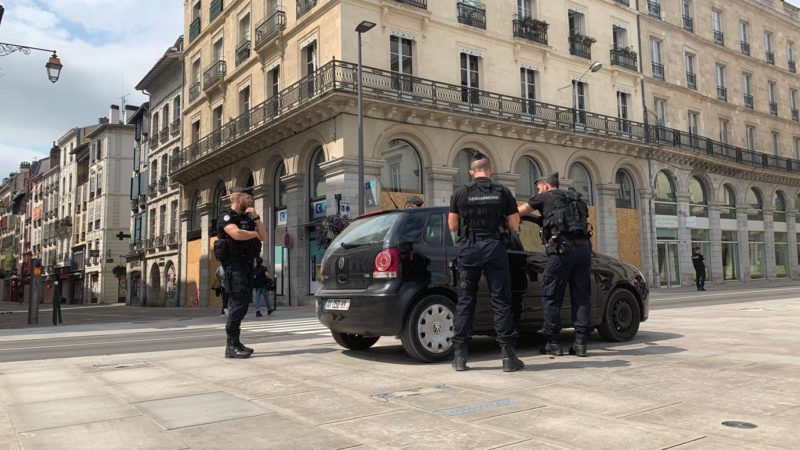 Journalists have called it “bunkerisation“, and it’s understandable why. The beautiful coastal resort of Biarritz was descended upon by 13,000 cops and turned into a fortress of concentric rings that could make any wannabe dictator hard.

There was the blue zone, where locals could go. There was the red zone, where anyone who was unfortunate enough to live inside it’s perimeter could venture… once they had been stopped and searched.

Then there was the inner ring (the best part of the city) that was reserved exclusively for the global elite.

The city was like an anthill for law enforcers. It was difficult to go two streets without encountering a parade of cops on the look out for protesters.

There were even makeshift cells and a court for people charged.

2. This Created a Hostile Atmosphere

An unsettling feeling descended upon the city of Biarritz the night before the summit was due to start.

Whilst a significant amount of police was to be expected, the mere presence of Gendarmerie and CRS troops lurking in the area provoked more fear than a stop and search could have possibly done (although these were unsettling as well).

Or as local Fredric rather glibly described it, it is “a war zone”. Officers with assault rifles eyed you up when you walked down a street you had every right to be on and the beaches were unusually quiet with military boats on the horizon.

You felt like you were being constantly watched by people who hold the power to take life in their hands seemed to have a damaging psychological effect after a relatively short time in the city.

This was against the backdrop of a usually bustling tourist town, now filled with empty streets and boarded up windows that wouldn’t look out of place in Chernobyl.

It created a bizarre and frightening atmosphere, one which I have never experienced before in a supposed democracy.

This prompts  the question, ‘should the presence of police really be instilling fear in the citizens they are there to protect?’

Somewhat unsurprisingly the locals weren’t too pleased with their home being turned into an amusement park for politicians, while they were treated like felons for simply existing.

This was especially distressing for them as it was the height of August when the local economy would normally be benefiting from the tourism boom.

Frederic joined the protests against the G7 because he felt he had been unfairly “imposed upon”.

He lamented not being able to walk around in his own town and being “blockaded” for 15 days in the run up to, and during, the conference and said he “was angry at the system Macron and his troops represent”.

Frederic wasn’t alone. Many of the boarded up shops had notes expressing frustration at the forced closures in their windows and one of the few open bars by the Chambre D’Amour beach sported propaganda from the alter-globalisation movement on its taps.

Once again it’s worth stressing just how empty the city was. Normally it would be heaving at this time of year, but during the summit it was a ghost town.

Macron has promised locals that holding the summit there will bring in tourism in future, but that does little to help with the current state of affairs. It’s nowonder they are angry.

Equally there was the thorny issue of the Basque question. Separatism supporters were among the protesters. We spoke to a woman, who wasn’t a separatist, but said that she felt that the imposition of the G7 in this way didn’t respect the Basque identity.

Macron wanted to use Biarritz to display the beauty of France. In his typically Paris-centric way he constructed an image of the area that glossed over the strength of the regional identity that does not sit comfortably alongside his soft French nationalism.

If Emmanuel Macron did not want protests at this year’s G7 he went about it in completely the wrong way.

He should have listened to the desires of his people. Instead, he turned Biarritz into a quasi-police state, limiting the protests to small isolated pockets which were crushed quickly by the oversized hammer of police brutality like some grotesque game of fascist ‘whack-a-mole’.

Climate and anti-globalisation protestors seemed to make up the majority of those who took to the streets, with a participant of ‘the Climate Bike Tour’ who had cycled to the summit all the way from Bourdeaux stating that “the main invitee to the table should be the planet”.

Macron made a sudden U-turn by suggesting last minute that climate change should be bought to the table (he enjoyed praise from condemning the Amazon fires).

He should have had an open and honest discussion with his citizens and a committed approach to stopping climate change. Maybe then he wouldn’t have to worry so much about the waves of angry protestors currently knocking at his door.

5. The Worst is Yet to Come

This G7 summit, amid a general global authoritarian turn looks to be a harbinger of things to come.

The militarisation and policing of the city and the repression of protests reached an unprecedented level at this summit and offers us a microcosm of the way capitalism is now working.

The rich take the spoils of common wealth for themselves and because they struggle to maintain consent for the system, they preserve their power and status through force instead.

Press freedom is beinggradually eroded in France generally, and at the summit in particular, with journalists being stopped from reporting and being subject to many of the same violent measures as the protesters they are trying to document.

This is occurring in a state run by a supposed liberal, so what comes next if the right win?

Several protesters told us they are worried about the prospect of Marine Le Pen’s niece Marion Maréchal Le Pen taking over as head of the far-right National Rally (RN) party.

Control, repressive policing and the crushing of dissent are already being normalised in France by a ‘centrist’ so what would it be like under a far-right presidency?

Macron is widely hated, and it is by no means unlikely that his hubris will deliver the RN to office.

He will hand them not only a situation in which people are becoming used to coercive state power, but the apparatus with which they can pursue their agenda.

Olly Haynes has written about police violence in France for New Internationalist, Novara Media and Red Pepper, on vegan protesters for The Ecologist and about public banks for CityMetric.