The Tory leadership candidate has been cosying up to the US President and is reportedly close with Trump's son-in-law Jared Kushner. 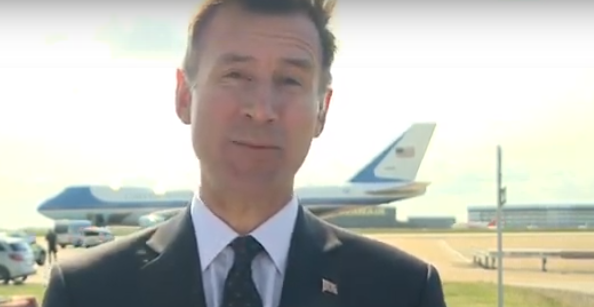 The Foreign Secretary Jeremy Hunt has defended Donald Trump over his insulting tweets about Mayor of London Sadiq Khan.

Ahead of his state visit to London, Trump said Khan was short and called him a “stone cold loser”.

When asked about this, Hunt said: “[Khan] has made some pretty choice insults about Donald Trump. And all I would say is that spat started because the Mayor of London and other people in the Labour Party decided to boycott this visit and I think that is just totally inappropriate.”

Hunt went on to call Trump “the leader of the free world and our closest ally”.

While Khan has criticised Donald Trump’s policies and said he should not be welcomed on a state visit, he has not used personal insults like “dumb” “short” or “loser”.

Hunt is running for Tory party leader and will later be present at a state dinner held in Donald Trump’s honour.