"Working people should fear what comes next. Her replacement will be chosen by the hard right of the Tory Party." 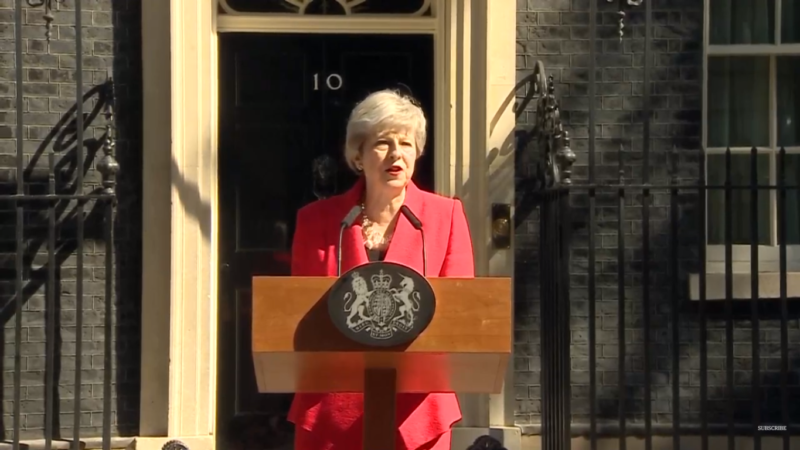 On the steps of Downing Street this morning, Theresa May has announced her resignation as Prime Minister.

The PM will step down as leader of the Conservative party on 7th June, with the process to select a new leader starting the following week.

A Prime Minister held to ransom by the European Research Group, who pledged to tackle the ‘burning injustices’ of society but failed, her immediate legacy will be of disastrous inertia.

Refresh this page for the latest reaction and comment…

The Green Party have called for ‘calm heads’…and a ‘People’s Vote’:

“The Prime Minister’s resignation today should signal the end of the broken Brexit process. She has left the country facing more challenges than she has resolved…

“There is only one solution which is both democratic and legitimate – and that is to return this decision to the people with a people’s vote as soon as possible. Now more than ever, the people of the United Kingdom must decide the next steps.”

“The shambolic handling of Brexit, the yawning inequalities in this country, our fraying public services and our once-proud manufacturing industry sliding into decline are the legacy of this prime minister and her woeful Tory government.

“It is a grave insult to the people of this country that our fate now lies in the hands of scheming Tory MPs and a few thousand Tory members.”

“While May was almost uniquely ill-equipped to be negotiator we needed, truth is she was given impossible job You can’t achieve a hard Brexit & avoid hard border in N. Ireland, & no new PM can achieve it either. [The] case for a #PeoplesVote is stronger than ever.”

Some say we should feel bad for Theresa May.

The Lib Dems say Brexit should now be taken back to the people. Would a General Election count?

“The Prime Minister is right to recognise that her administration has reached the end of the road.

“Sadly her compromises through the last three years have too often been with the right-wing of her own party, rather than about bringing the country together.

“The best and only option remains to take Brexit back to the people.  I believe the public would now choose to Stop Brexit, and stop the immeasurable damage the process has done to the United Kingdom”.

“Although I profoundly disagree with Theresa May on almost every issue, her resignation speech shows her commitment to doing what she believed was right. In the future I wish Theresa May well, but in the immediacy we face an ever increasing challenge.

“On the steps of Downing Street Theresa May spoke of compromise, but she simply wasn’t willing to do so herself. Sticking rigidly by her red lines, Mrs May ignored the interests of Wales and millions across the UK who felt alienated by her approach to Brexit, as summed up in her ‘No Deal is better than a bad deal’ catchphrase.

“This may be the end of the Prime Minister, but the beginning of a new Brexit battle.”

The New Statesman‘s Stephen Bush made a good point – Theresa May emboldened the Tory hard right, speeding up her own downfall. The phrase “no deal is better than a bad deal, the most harmful soundbite in British politics, was produced, repeated and endorsed by her,” he says.

“The Prime Minister is right to have resigned. She has now accepted what the country has known for months: she cannot govern, and nor can her divided and disintegrating party.

“The burning injustices she promised to tackle three years ago are even starker today.

“The Conservative Party has utterly failed the country over Brexit and is unable to improve people’s lives or deal with their most pressing needs.

“Parliament is deadlocked and the Conservatives offer no solutions to the other major challenges facing our country.

“The last thing the country needs is weeks of more Conservative infighting followed by yet another unelected Prime Minister.

“Whoever becomes the new Conservative Leader must let the people decide our country’s future, through an immediate General Election.”

“Theresa May’s premiership was doomed from the moment she bound the country to the ERG’s impossible red lines. Any Prime Minister who maintains the fantasy that we can leave the EU but keep the benefits is destined to fail.

“It’s clear that the only way out of this mess is to give the decision back to the people in a final say vote on whether we still want to leave the EU or not.”

“Brexit is tearing the country apart and now it’s ended yet another Prime Ministerial career. We cannot entrust our country’s future to the outcome of a Tory leadership contest.

“The future of this country is being decided by a faction of extreme Brexiters hell-bent on making their ideological fantasies come true. Theresa May bowed to them every step of the way, but it still wasn’t enough to stop her political demise.”

To those feeling sorry for Theresa May:

4m+ kids in poverty
1m+ Foodbank users
1.9m OAPs in poverty
8.4m struggling to eat
NHS being systemically privatised
The disabled having their benefits cut
The worst homelessness I have ever seen

Sorry but I’ve no sympathy for her #Trexit

The Prime Minister repeated her line about tackling the ‘burning injustices’ of society, which he made when she first became PM. She has failed – as this piece on Wednesday pointed out.

“Theresa May will go down in history as one of the worst prime ministers. She has done nothing to repair our broken public services, forgotten all about families struggling to get by, brutally mistreated the Windrush generation and woefully mismanaged the aftermath of the Brexit vote.

“However, working people should fear what comes next. Her replacement will be chosen by the hard right of the Tory Party, who want more austerity, increased privatisation and fewer rights for working people.

“That’s why there must now be a general election. The decision about who leads the country must be taken in every community, not by the Brexiteer boys’ club in the tea rooms and bars of Westminster.”

10:13 – Change UK interim leader Heidi Allen says: “Oh @theresa_may, why didn’t we see that emotion more? Things could have been so different…”

The GMB union were hot off the mark. Britain’s general union has called for a general election.

“This Government has given us more farcical scenes than The Thick Of It and more brutal be-headings than Game of Thrones.

“But no one is going to be sorry when this series ends, working people are sick of the Tories focusing on who is going to take Theresa May’s job when thousands across the country are losing theirs.

“We cannot let Britain’s workers, industries and communities become the casualties of the next round of Tory internal wars. Let’s have a general election and let the people decide.”

6 Responses to “Theresa May resigns: Reaction from across the left”